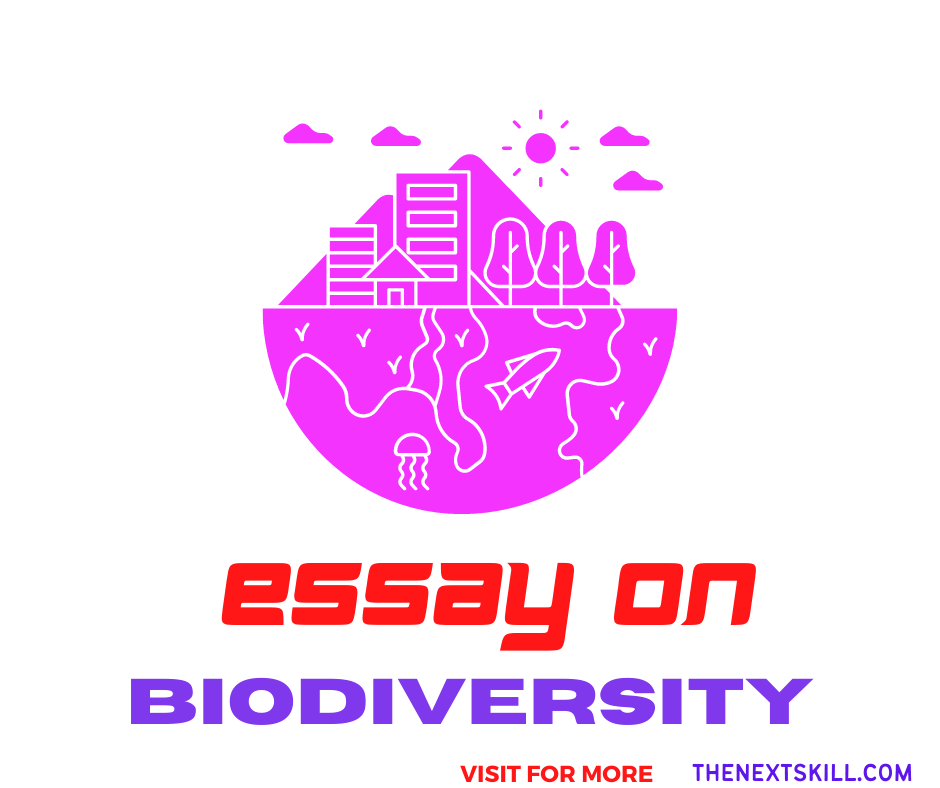 Essay On Biodiversity: The earth is the only known planet having the existence of life on it. Besides, life has manifested in different forms such as animals, birds, plants, microorganisms etc. Among these broad categories, Each one has its variety. This diversity is called Biodiversity.

In other words, Biodiversity refers to the presence of different species of plants, animals, insects, and reptiles on the earth. It is one of the essential parts of the ecosystem that help in running the life cycle effortlessly.

Welcome to Thenextskill.com. This page will help you compose an essay on biodiversity in simple English language. This article is written in different parts having short and long variations of the essay. These essays range from 150 to 500 words. Students can read one or more of them for better understanding.

Biodiversity is the most vital factor in running the life cycle and maintaining the balance of the earth as living things are interdependent. If one life form is decreased or eliminated from the environment, other life forms have to face negative effects because of that. Thus it can endanger the existence of life on earth.

The present scenario is not in our favour means we are under threat of damaged biodiversity. That is why preserving biodiversity is the need of the hour. Even though many initiatives are on, we need to put more effort to conserve our biodiversity.

Introduction- Biodiversity or biological diversity refers to the presence of different species of plants and animals on the earth. A lot of reasons can be described for the biodiversity on earth such as geological positions, temperatures, climatic conditions and genetic changes etc. Biodiversity is considered a vital part of the life cycle on earth.

Importance- There is a very thin line between biodiversity and ecology. One can not exist without the second. We can conclude that these two terms refer to the same intention. Hence, biodiversity is very important in maintaining the ecological balance as living things on the planet are interdependent.

If one species is decreased in number or eliminated from the environment, other species have to face negative effects because of that. Moreover, we humans are dependent on plants and animals. Thus our life is also dependent on biodiversity. If it damages, we will have to face the results.

OUTLINE OF THIS ESSAY ON BIODIVERSITY

Nature has created diverse forms of life such as plants, animals, insects, microorganisms etc. This diversification is known as biodiversity or biological diversity. Biodiversity is not uniformly dispersed over the planet and it is found more in the forests and locations undisturbed by humans.

Nature’s intelligence is very sophisticated to understand. It has designed everything so well that despite having no similarity living beings are interdependent to survive. Biodiversity is one of the essential parts of the ecosystem that help in running the life cycle effortlessly. That is the reason that biodiversity holds a huge significance for each organism whether it is a plant, animal or human being.

Biodiversity is the most critical factor in executing the life cycle and maintaining the balance of the earth as living things are interdependent. If one life form is lowered or eliminated from the environment, other life forms have to encounter adverse effects because of that.

Moreover, we humans are dependent on plants and animals. Thus our life is also dependent on biodiversity. If it damages, we will have to face the results. Thus it can endanger the existence of life on earth. Furthermore, there are many studies have been conducted on the effect of change on biodiversity and the outcomes were shocking.

There are lots of threats to biodiversity. First of all, a constant change in the climate is endangering many species. Some of them are at the ledge of extinction. Second, we humans are clearing out forests for various purposes that expells wild animals of their homes and eventually they die of the lack of food and shelter.

Third, pollution and chemicals discharged into the water bodies cause many aquatic animals to die which also decreases the amount of biodiversity on earth. Fourth, the smuggling of rare plants, trees, animals, their skin, their bones and other byproducts is one of the most critical threats to biodiversity.

HOW TO INCREASE BIODIVERSITY

We have lost a large amount of biodiversity in the past time and the adverse effects can be identified. Now, it is time to find a solution to increase biodiversity to restore the ecological balance. We can do it by taking various steps and initiatives. We need to eliminate the reasons responsible for the decrease in biodiversity.

Apart from that, we need to put effort to build a perfect planet to live in. We can do the following things to help biodiversity

To sum it up, One of the reasons for the execution of life on the earth is biodiversity. It is important to restore biodiversity on the planet. For this to happen, humans must take control of their actions against the ecosystem. It is time to protect the earth’s flora and fauna to witness sustainable development.