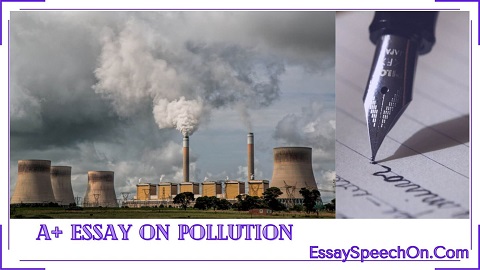 Essay On Pollution– “Water and air, the two essential fluids on which all life depends, have become global garbage cans.” We, humans, Made it and make it dirty by doing different unnecessary activities.

Now, how could pollution be prevented if the preventer (the human being) is also polluted? This means it is purely man’s choice to pollute and to prevent the same. What will be chosen between the two?

Below are some essay compositions on pollution in different word lengths like 100, 150, 200, and 500 Words for educational purposes. If you were finding the same, choose the best one according to your need.

1️⃣ The action of making the air, water and other environmental elements dirty and dangerous.

3️⃣ The action of dirtying the physical and biological components of the earth’s environment to such an extent that normal environmental processes are adversely affected.

1️⃣ Pollution means making the environment dirty. We, humans, make it dirty by doing different activities.
2️⃣ Pollution is the greatest problem for all living beings as it is transforming the environment adversely.
3️⃣ There are four principal types of pollution. They are pollution of air, water, soil and noise.
4️⃣ “Water and air, the two essential fluids on which all life depends, have become very polluted.”
5️⃣ Pollution is the biggest killer in the world. It takes around 100 million lives every year.

6️⃣ 5000 people die every day as a result of drinking polluted water which is also affecting aquatic life.
7️⃣ Ghaziabad is considered the most polluted city in India (2020) and Hotan, China in the world.
8️⃣ Almost 80% of urban waste is dumped in the river Ganges making this river the most polluted in India.
9️⃣ The problem of pollution needs urgent attention and treatment for achieving a healthy environment.
🔟 We need to perform nature-friendly activities to control pollution.

[Fact #2] Approximately 46% of the lakes in America are extremely polluted and hence risky for swimming, fishing, and aquatic life.

There are various factors that cause pollution. Some of them are natural and others are human-generated. But most of the pollution in the environment is brought by human activities. Even today, when it has become a global threat that is taking millions of lives every year, it is continued.

The problem of pollution needs urgent attention and treatment. People should take care of the environment and ecosystem. We need to perform nature-friendly activities to control pollution. Planting more trees can help in reducing air pollution. The government should do all the things that can reduce pollution.

“Man is the only animal that fouls its own nest”. This is true because deadly pollution is a result of human activities. The problem of pollution is the greatest threat to life on earth. It is severely impacting the living beings on the planet.

In fact, pollution is the ground for many dangerous diseases and a large portion of deaths. Pollution has many types but four main types of pollution are impacting us very seriously. It is time to tackle this issue as soon as possible.

Pollution is categorised into many buckets like plastic pollution, thermal pollution, visual pollution, radioactive pollution and many more. But pollution of air, water, soil and land are four chief types of pollution that leave a hazardous impact on the environment and living beings.

1️⃣ Air pollution– We can survive for some time without food, but we cannot survive even for a few minutes without air. This simple fact tells us how important clean air is to us. But the air is not as healthy today as it used to be. It is because of a mixture of solid particles and harmful gases in the air.

2️⃣ Water pollution– It is next on the list and a reason for a large fraction of deaths globally. It is the sole reason for some diseases such as Jaundice, Typhoid and cholera.

3️⃣ Noise pollution– It is an underestimated type of pollution that affects human behaviour directly or indirectly. It impacts the physiological and psychological health of people.

4️⃣ Soil pollution– Soil or land pollution reduces the fertility of the soil. As a result of which farmers use a chemical treatment to grow more crops but this crop is not so good for health.

There are numerous causes of pollution but human activities are considered the primary cause of pollution. Urbanisation and industrialisation are contributors to the increment of pollution. Another cause is fuel-based vehicles that produce carbon dioxide.

The chemical waste that is supplied in the rivers and decomposed in the land is lowering the quality of natural resources. Apart from these, excessive noise in the environment is the sole cause of noise pollution.

It creates problems with breathing in humans and other species. Apart from air pollution, if we talk about water pollution, a large fraction of deaths globally are caused by water generated diseases.

Furthermore, the crops are also toxic because of growing in the presence of polluted water and soil. It means pollution is, directly and indirectly, impacting our physical health and immunity. Also, our psychological health is impacted by noise pollution.

Pollution is reducing the expectancy of life over time. We need to support nature so that it can support us. Pollution is a critical puzzle for humanity to solve. As human activities are the main reason behind this. I hope humans will find a way to counter it.

If you like this pollution essay. Share it with your friends and give your views in the comments.

Main Headings of Essay on Pollution

Pollution is a big concern that is harming our planet earth. Nature provides us with a lot of resources to help us live healthier but we are just snatching the purity of these. The addition of pollutants in the natural elements is simply referred to as pollution. It has been widespread since the old times.

Pollution hits the ecosystem that is the very essence of life on the globe. Since the industrial revolution, pollution has been rising drastically.

Industrial waste products and chemical-based elements are being released into nature without any legit treatment that harms the climate at a greater level. It will become a big puzzle for life on earth in the future. Pollution is a disease on our planet earth and we should cure it as soon as possible.

[Fact #4] China is the world’s largest producer of carbon dioxide. The United States is number 2.

Air Pollution: Air pollution simply means contamination of the air. The burning of wood and coal produces several hazardous gases that mix into our atmosphere making it contaminated for life on earth.

Water pollution: We all know what Water pollution is. To make the water in a condition that is dangerous for living beings to consume is simply known as Water pollution. As we all know Water is the basis of life on earth and an important natural resource, we must use it very carefully.

Noise Pollution: Useless and excessive noise in the environment is called noise pollution.

Industrialisation: Industrialisation is the next cause on the list. Smoke, carbon dioxide, sulfur dioxide, ammonia, and particulate matter produced by industries cause air pollution. And chemical wastes released in the water and rivers cause water pollution at a great level. Industries also produce excessive noise pollution in the environment.

Urbanisation: With the development of lifestyle, urbanisation is growing rapidly. This growth is causing the exploitation of natural resources like wood, soil and water. Deforestation is the result of urbanisation and growing air pollution.

Natural Causes: There is some natural cause of pollution that we do not have control over. but they are harming the environment critically. Some of these are volcanic eruptions, global warming, natural calamities etc.

[Fact #5] Antarctica is the cleanest place on Earth protected by anti-pollution laws.

Effects on health: Pollution affects the quality of life more than one can imagine. It affects human lives directly and indirectly. It is a source of many diseases like asthma, diarrhoea, jaundice, cholera, lungs related problems and more. Noise pollution is the reason for the physiological and psychological health of people who are exposed to excessive sounds. It can also cause impaired hearing and even deafness. A large fraction of deaths is caused by pollution around the world.

Effect on the environment: Pollution is a grieving problem for the earth as it is affecting the ozone layer. It affects the natural ecosystem too. The problem of global warming and climate change is also a little bit caused by pollution. Apart from these, pollution is impacting the quality of air, water and food. The sudden tweaks in weather, fluctuations in rain patterns and many other problems are caused by pollution.

How to Control Pollution

Duties of individuals: As we all know that human activities are one of the primary causes of pollution, humans need to mind their activities in a way that is nature friendly. We need to walk more instead of using fuel-based vehicles. We should use a bicycle to cover a short distance. Plantation should be encouraged as trees consume carbon dioxide and produce oxygen, they will help increase the level of oxygen in the environment.

Furthermore, we should focus on buying recyclable products that are biodegradable. We should use jute made carry bags and paper envelopes in place of plastic bags which are the biggest challenge for the atmosphere.

Duties of Government: The government should also be strict to curb the problem. A great way to prevent pollution is to create awareness among the people about the adverse effects of pollution. It must enforce laws to prevent the disposal of chemicals and physical harmful things into the environment and should impose fines for those found doing so.

Again, awareness and governance can be the most effective ways to reduce pollution. Also, the creation of factories and industries far from residential areas can be a great way to prevent pollution.

In conclusion, “Destruction is a man’s will, Nevertheless, Prevention is also a man’s will, It’s a man’s choice to choose between Destruction and Prevention. Pollution is a big concern that is harming our planet earth. It is an issue that needs to be solved as soon as possible so that we can expect a healthy and comfortable life. Individuals should do their duties for the planet and important measures should be taken to curb this problem. The government should impose penalties on those found involved in producing pollution.

[Fact #6] Pollution in China can change the weather in the United States.

Do share this Essay on Pollution with your friends!!!