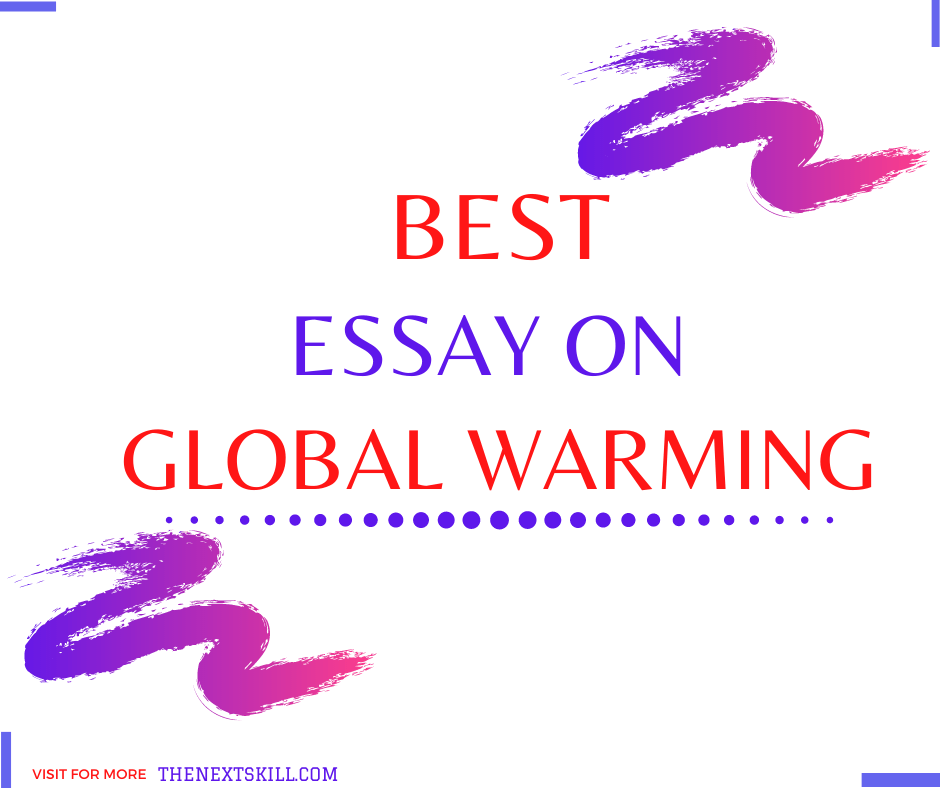 Essay on Global Warming– The increase in the temperature of the earth’s surface is known as Global Warming. It has become a terrible problem. Due to the impact of global warming, irregularity of Earth’s weather system, heat waves, tropical storms and forest fires are now more common.

What is the use of a house without having a suitable planet to live upon? So, it is the need of the hour to find resolutions to this critical problem that is impacting life on this planet. For that, we have to understand the root cause and other reasons.

Welcome to Thenextskill. This page will help you compose an essay on global warming in different word lengths like 100, 150, 200, 250, and 500 Words. If you want to learn the art of writing an engaging essay, you can read- The essay Writing Guide.

1️⃣ The increase in the temperature of the earth’s atmosphere, is caused by the increase of certain gases like greenhouse gases.

2️⃣ Global warming simply means climate change that causes an increase in the average temperature of the lower atmosphere.

1️⃣ Our planet Earth is getting warmer Year by Year. This condition is simply called Global warming.
2️⃣ It is a serious problem for all living beings. It is also affecting the environment.
3️⃣ If the temperature will go very high, our life will become tough.
4️⃣ The life of animals, birds, and plants will also get in danger.
5️⃣ We will also face a water shortage problem, So start saving water.

6️⃣ Carbon dioxide is a Greenhouse gas and a reason for Global warming.
7️⃣ Greenhouse gases absorb the radiation and make the environment warm.
8️⃣ Vehicles like cars and bikes produce a lot of carbon dioxide. We need to use vehicles as little as possible.
9️⃣ We can use a bicycle to cover short distances. Help the earth to live a comfortable life.
🔟 Trees inhale carbon dioxide from the environment. So we can plant more trees to reduce global warming.

Our planet’s environment is made up of multiple elements. Temperature is one of those elements. It plays a significant role to sustain life on Earth. A little change in the Earth’s average temperature can negatively impact living beings’ lives on the planet. This change can be an increase or a decrease.

When Earth’s average temperature increases continuously, it is called Global Warming. The temperature of the Earth’s surface has increased more than one degree Fahrenheit in the last century. This increase is adversely affecting the life and ecosystem of Earth.

There are some natural and some are human-generated causes of global warming. The natural ones are the Greenhouse effect, volcanic eruptions, forest fires, and increasing population as humans and animals exhale carbon dioxide.

If we talk about the causes generated by humans. They are greenhouse gas emissions (greenhouse gases like carbon dioxide, sulphur dioxide, nitrous oxide, ozone, water vapour), deforestation, mining, and fossil fuel burning. Human activities are considered the greatest cause of global warming.

Global warming leaves very severe effects on Earth’s atmosphere. It can affect the pattern of rainfall and an increase in sea level. It also can cause glacier melting, heat waves, extreme seasons, etc.

Scientists agree that the earth’s rising temperature is fueling longer and hotter heat waves, more frequent droughts, heavier rainfall, and more powerful hurricanes. If global warming continues, all of these conditions will get more critical.

First of all, Deforestation needs to be stopped at all levels. Government should impose a strict penalty on those who are found doing so. Secondly, we should plant more trees as they inhale carbon dioxide. More trees, less global warming.

Apart from that, people must use vehicles efficiently and should use a bicycle for covering shorter distances. Encourage eco-friendly and recyclable products. Most noteworthy, we should spread awareness about the severity of global warming.

In conclusion, Global warming is adversely affecting the life and ecosystem of Earth. It is a type of disease for the environment and we have to heal it. We need to restrict the natural calamities of the future. Human activities are highly responsible for the increasing temperature of our planet. Hence, humans must take responsibility to tackle it.

Earth is the only known planet that supports life. It is just because of its most suitable environment. Temperature is one of the environment’s crucial elements. An increase or decrease in the temperature can make or break this suitability. Unfortunately, the earth’s average temperature is rapidly increasing.

The increase in the average temperature of our planet “Earth” is called Global Warming. The temperature of the Earth’s surface has increased more than one degree Fahrenheit in the last century. Therefore, we are facing its adverse effects. If it continues, conditions will turn more dangerous.

The universal law of cause and effect states that for every effect there is a definite cause. Hence, the adverse effects of global warming, there are multiple causes. We can categorise the causes of global warming into two different buckets. 1. Natural Causes, 2. Human Activities.

Natural Causes– The greenhouse effect is the first natural cause. It is a natural process that warms the Earth’s surface. When the Sun’s energy reaches the Earth’s atmosphere, some of it is reflected in space and the rest is absorbed and re-radiated by greenhouse gases like carbon dioxide, sulphur dioxide, nitrous oxide, ozone, and water vapour.

Volcanic eruptions are another natural reason for Global Warming. When a volcano erupts, a mixture of lava, steam, gaseous sulfur compounds, ash, and broken rocks spread on a very large fraction of the earth’s surface. Forest fires- Sometimes forests caught fire naturally and contribute to the problem of global warming.

Causes By Humans– One of the human-generated causes is the emission of carbon dioxide and other greenhouses gases. With the increasing use of fuel-based vehicles, the amount of carbon dioxide in the environment is growing.

Trees absorb carbon dioxide from the air but deforestation has reduced its scope. The rest comes from burning wood, and burning fossil fuel in cars, power stations, and factories.

Global warming is imposing extremely serious effects on the earth’s atmosphere. It is affecting the planet and the life of living beings as well.

Effects on Planet- Because of global warming, the earth’s temperature is gradually increasing. It can lead to a rise in temperatures of between 0.3-and 0.7 degrees Celsius by the year 2035. If we talk about another 100 years it will make the earth hotter than it was before 100,000 years. It is also a reason for the changes in rain patterns that leads to natural calamities like drought and flood.

Effects on living beings– It is impacting our lives as well. Storms, tornadoes, and hurricanes are also results. when these occur, a large number of resources and human lives get destroyed. If global warming continues these will become more frequent and stronger than before. It can lead us to an uncomfortable life in future.

How to overcome It

As we know, this task is challenging but a solution is always there. We can control global warming to some extent through the mixed efforts of the Government and individuals.

Solutions By Government– The government must impose a complete ban on deforestation and impose a big penalty on its practice. Also, It should encourage people to use electric vehicles and bicycles instead of fuel-burning vehicles.

To sum it up, Global warming is a grave problem for the planet. This is our responsibility to tackle it so that our future generations can live a comfortable life. Every small step brings a broad change. So, we need to keep remembering our duties and practice them.

Hope you liked the post. If so, Don’t forget to share it with your friends and loved ones. Thank you so much for using this website.