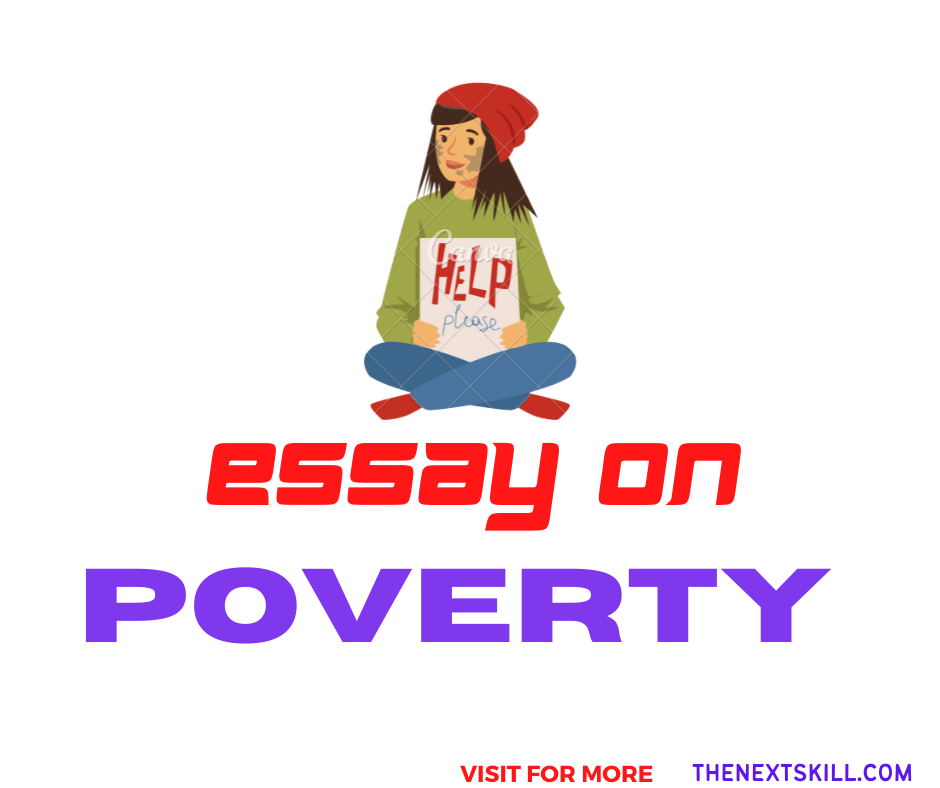 Essay on Poverty: You might be shocked to know the fact that “70 % of the population of the world holds only 3% wealth of the world”. Rich are getting richer and the poor are getting poorer. After knowing this shocking data what do you think about poverty?

Many tell that poverty is a state of mind. It might be a case for many but I am not really satisfied with this reasoning because I have seen various hard-working people who work hard to overcome their poverty. But due to a lack of support and facilities, they are helpless.

Welcome to Thenextskill.com. This post will help you write an essay on poverty for students and children and for those preparing for competitive examinations. In this given essay we will discuss the causes, effects and means of eradicating poverty.

Poverty is a social evil. This evil is widespread around the globe. Be it developing or developed, each country is in the catch of poverty. By definition, poverty is a condition of a family when its basic needs such as food, cloth, shelter and education are not met.

Moreover, poverty can lead to many other problems such as malnutrition, poor education, unemployment and domestic violence. Hence, we can conclude that poverty is the root cause of various other problems. The main ground for poverty is “the lack of money”.

There are various reasons that cause poverty in a country. The biggest reason considered is the rapidly growing population. Some other reasons are lack of education, civil wars, natural disasters, lack of employment etc.

The government of each country puts enormous efforts to eradicate poverty and help the poor. But it is not the responsibility of the government only, as a citizen of the country, individuals also can contribute their assistance to the fight against poverty.

The dictionary defines the term “Poverty” as “lack of enough money to live at a standard considered comfortable or normal in society”. A poor person is not able to meet the basic needs such as nutritious food, good clothes, protective shelter and good education for his family. Furthermore, poverty is not limited to a lack of food, clothes, shelter and education.

The poor are victims of many other problems such as exploitation, violation of their rights, injustice, abuse and security. Corruption plays a huge role in making this problem worse. Everyone has the right to live equally but poverty creates divides and social inequality.

There are uncountable causes of poverty. Some of the main causes are listed below:

Another major cause of poverty is unemployment. Due to a lack of employment people can’t earn enough money to fulfil their basic needs. Due to automation in industries and other workplaces, there is a huge cut in the job market leading to poverty for many.

Education plays a significant role to provide you with a good future by providing you with various opportunities. An educated person has more opportunities and skills to earn money than an illiterate person. Education broadens your thinking and helps you find solutions to any problem whether it is poverty.

Poverty is a social evil with various negative effects. Some of the effects of poverty are discussed below:

As we know poverty is a condition when poor people face difficulties in meeting basic needs. So, they can not afford to send their children to schools to get an education. This leads to illiteracy in their children.

A poor person is forced to live under unhygienic conditions in slums. There are no proper sanitation & drinking water facility in slums & he falls ill often &  his health deteriorates. A poor person generally dies an early death. This creates fluctuations in the average mortality rate.

Poverty not only affects the lives of poor people but it also affects the countries in various ways such as:

It makes sense that poverty reduces the productivity of a country. A country lefts with less number of helping hands contributing to the progress of the country than it could have.

It is very obvious that poverty affects the economic growth of a country. A nation with a high poverty rate can never utilize its human resources to the fullest. This is due to a high number of uneducated and unskilled individuals in the country.

HOW TO ERADICATE POVERTY

For a human being, food, clothes and shelter are the three basic needs to ensure survival on the planet. But only survival is not enough to possess equality in society. So, first of all, we need to find a solution to these three things for the poor.

The government should ensure that the poor families of the country get food at an affordable price. Individuals also can contribute by opening some stalls that provide cheap food.

Free education is one of the effective solutions for eradicating poverty. Education broadens thinking and helps people find solutions to any problem. Education opens many opportunities to earn money.

The government must ensure providing houses to the families who do have not a good and protective living place.

D. Clothes and other things

The fashion industry sells a huge amount of stocks every year. But not all the clothes are fully utilized. Individuals can donate unused clothes to needy people. There are many NGOs that work in the field

In conclusion, Poverty is a social evil. This evil is widespread around the globe. Be it developing or developed, each country is in the catch of poverty. We can conclude that poverty is the root cause of various other problems. The government puts enormous efforts to eradicate poverty but it is not the responsibility of the government only, as a citizen of the country, individuals also can contribute their assistance to the fight against poverty.