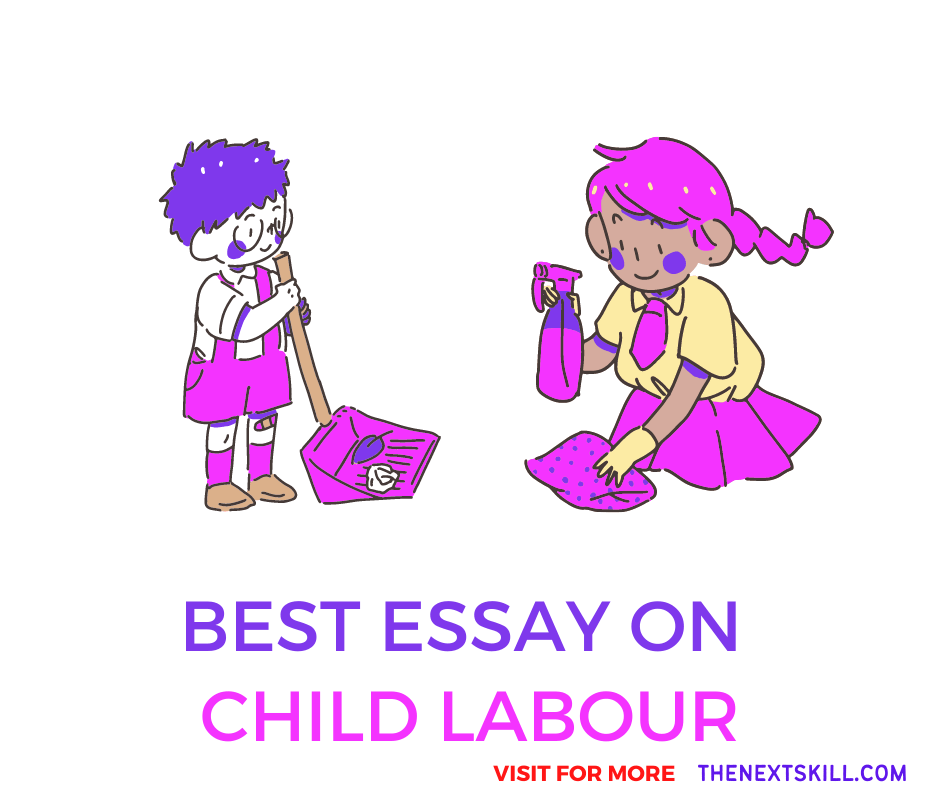 Essay On Child Labour- The term “child labour” needs no definition. It snatches the childhood and dignity of children. It simply refers to a crime where children have to work at very early ages. Various reasons drive children to work with or without consent.

No Doubt, child labour is a heinous crime that deprives children of their childhood and hinders their physical and mental development. But a lot of employers employ children for the sake of cheap labour. According to law, employing a child in any kind of work is a criminal offence.

Welcome to Thenextskill.com. This post will help you compose an essay on child labour in 100, 150, 200, 300, and 500 Words. You can also read our Essay Writing Guide here to improve your writing skills.

There are lots of evil practices in every country responsible for their stuck growth and prosperity. One of those practices is child labour. The global surveys show that 152 million children – 64 million girls and 88 million boys are in child labour globally, accounting for about one in ten of all children worldwide.

The major cause that encourages child labour is poverty. Poor families have to put their children into this Dirty swamp so that they can fulfil their basic needs. Additionally, they are not able enough to afford education for their children. Also, employers employ children for the sake of cheap labour.

Child labour is not only destroying the future of young ones but also of our country because upcoming generations define the progress of a country. We all have to take steps against this terrible practice so that our young generation can get their true rights.

The term child labour itself is defined. When a child is forced to work as labour, is called child labour. It destroys the childhood of children and also their future is burned to ashes. They have to do work to support their family because of the poor condition of their family.

They have to do employment at a very early age when they are supposed to play with toys and study at school. Because of this evil practice, they lose their childhood and their actual rights. Our country is called free but a large number of children are still stuck in the web of child labour.

Various causes encourage child labour. The major cause is poverty. Poor families have to put their children into this Dirty swamp so that they can fulfil their basic needs. Additionally, they are not able enough to afford education for their children. Another reason is the social and economic backwardness that drives them here.

Also, various kinds of diseases and addictions of family members force them to work at an early age. Another big reason is the lure of cheap labour from industries provokes this crime. As child labours are cheaper than regular labour, employers tend to hire children to save money.

The consequences of Child Labour are very frightening. Children have to face many injuries during work like cuts, burns, fractures, excessive fears and nightmares. Additionally, they are abused and beaten by employers for small mistakes. Even they are forced to consume alcohol so that they can work more than their capabilities.

To sum it up, Child labour is a vicious crime that is needed to trash out from society and country. It is not only destroying the future of young ones but also of our country because upcoming generations define the progress of a country. We all have to take steps against this terrible practice so that our young generation can get their true rights.

Child labour is a term that everyone is well aware of. It simply refers to a crime where children have to work at very early ages. It snatches the childhood and dignity of children. It is something like burdening them with huge responsibilities of which they are not capable enough.

It is a cause of underdevelopment of their physical and mental health. Poor or economically weak families in India push their children to work for money instead of educating them. It is a shameful practice that is needed to be thrown out of the country so that children can retrieve their real rights.

Many major causes promote this evil practice. Poverty is the biggest reason that drives it to a high level. Poor Families have no choice but to put their children into this hell because of fewer earnings to meet the basic needs of the family.

One of the other primary causes is The lure of cheap labour. As they are cheap to hire than a regular adult worker, industries prefer child labours.

Unaffordable education is another reason for it. As economically weak families can not afford to send their children to school, they force them to earn money. Moreover, The poor mentality of families that education has no value at all made them engage their children in work.

The first and foremost effect of child labour is children lose their childhood and basic rights to education. They are deprived of enjoying their innocence and naughtiness. At an age when they are supposed to play with toys, they have to play with dangerous tasks.

Children involved in child labour have to face several challenges during work time. They bear the load beyond their capabilities and so they get fractures and physical damage. In construction industries, they come across cuts, burns and wounds.

Moreover, they are beaten and abused for minor mistakes. Even they are made to consume narcotics to get more work done. Apart from it, Children become victims of sexual abuse. especially sexual exploitation of girls by adults, rape etc.

If we wish to remove child labour, we require to develop some very practical solutions which will defend our children. It will also improve the future of any country dealing with these social problems. To start with, we must build several organisations that undividedly work to stop child labour.

Besides, we need to keep the parents in the loop to educate them on the value of education. If we offer education free and make people aware, we will be capable to educate more children. Moreover, making people informed of the harmful results of child labour is a need.

additionally, family control measures should also be taken. This will diminish the family’s weight so when you have lesser mouths to feed, the only parents will be suitable to work for them, rather than the children.

Weak Laws: While the laws to diminish child labour have been executed, they are pretty dim. For instance, most of the laws are incapable to deliver strict guidelines for the unorganized sectors.

Lack of Awareness: Awareness in rural and urban areas is required to be spread out. this will help a lot to fight the curse of child labour.

Child Trafficking: This is another challenge in to fight against child labour. Children are sent far from their habitat that is unknown to them. They have the only choice but to step into this hell.

In conclusion, Child labour is a curse for our children that is needed to trash out of society as soon as possible. It is not only damaging the future of young ones but also our nation because future generations determine the development of a country. We all have to take measures against this terrible practice so that our adolescent generation can get their true rights.

I hope you liked, Essay on Child labour Do share it with your friends!!!

Stats and Facts about Child Labour