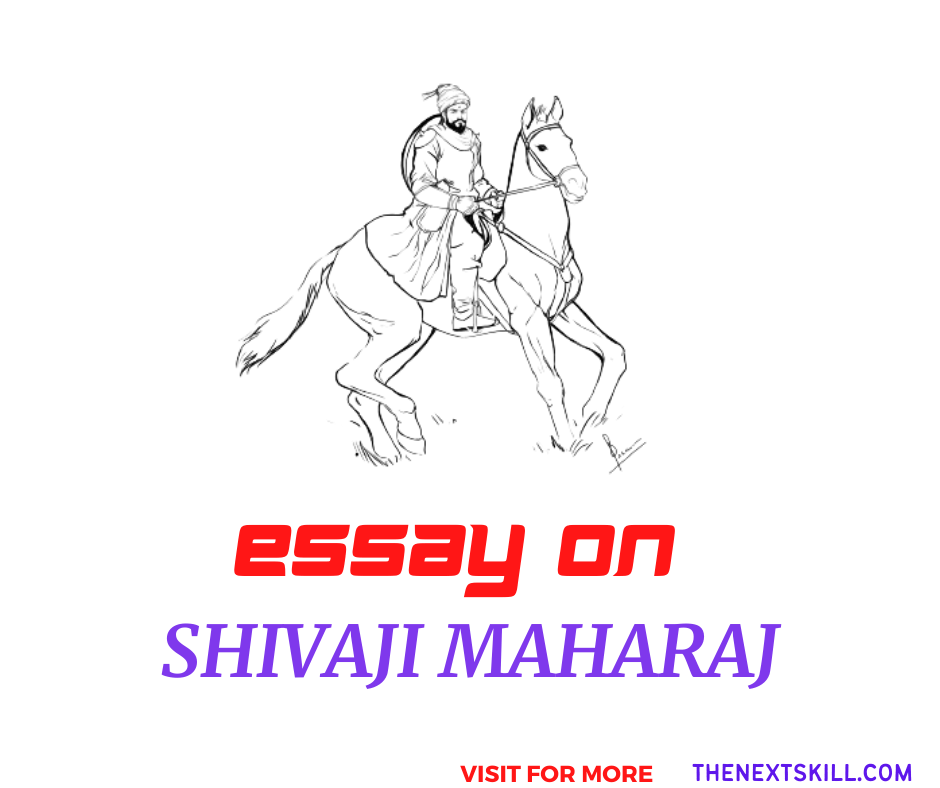 Chhatrapati Shivaji Maharaj was a guide like Lord Krishna and a warrior like Arjuna. He always respected women. This is because his mother told him the stories of Ramayana, Mahabharat etc. Apart from that, he was not against any religion but Mughals. In fact, there were many Muslims in his Army.

Welcome to Thenextskill.com. This post will provide you with an essay on a great warrior Chhatrapati Shivaji Maharaj. This essay is best suitable for the students studying in classes 6, 7, 8, 9, 10, 11 & 12. You can also cut it short to make a 100, 150 Words paragraph or extend it to make it a longer composition.

MAIN HEADINGS OF THIS ESSAY ON CHHATRAPATI SHIVAJI MAHARAJ

Chhatrapati Shivaji Maharaj is one of the shining heroes of Indian history. The one who refused to live like a slave. The warrior who strove for the wellbeing of his subject by fighting against injustice. The stories of his bravery and courage are legendary and have been inspiring Indians for generations.

Shivaji was born on the 19th of February, 1630 to Shahaji Bhonsale and Jijabai in Shivneri Fort in Maharashtra. His father Shahajiraje Bhosale was a prominent sardar in the Deccan. His mother was a very deeply religious woman. It is said that she prayed to Lord Shiva on Shivneri fort for a brave son.

His first childhood teacher was his mother Jijabai who told him the stories of the epics of Ramayana and Mahabharat. His mother had a big contribution in making him fearless and brave. Shivaji Maharaj has also imbibed the firm resilient features of an ideal Hindu’s character. He learned not to bow down to any force.

His Journey as a warrior took off at a very young age of 16. He had no army at first, he managed to assemble an army. He was encouraged by Dada Konadev to learn various warfare skills. His guru Ramdas wanted him to survive any diverse condition by using such skills.

Chhatrapati Shivaji Maharaj was a ray of hope for the people whose lives were ruined by the Mughal Empire. He created a feeling of trust and affection in minds of the people and kept the foundation of swaraj in the valleys of Mavals.

The inhabitants of this area who are called the Mavalas were extremely robust people. They joined Shivaji. The objective of Shivaji Maharaj in founding the Swaraj was clearly to seek the welfare of the people. He started his journey by capturing Torna Fort, Chakan Fort, and Kondana Fort.

He began to attack the enemies surrounding his kingdom. After capturing the Torna Fort, Chakan Fort, and Kondana Fort, he kept expanding his Maratha Empire by capturing one fort after another. Shivaji’s Empire was growing bigger and stronger day by day. This news spread all four directions.

Other rulers feared his name when heard the stories of his bravery and gallantry. Adil Shah, the king of Bijapur, was also got afraid. So, he imprisoned Shivaji’s father Shahji. But Shivaji Maharaj freed his father by using his diplomatic skills.

Knowing this Adil Shah became furious and sent his commander to kill Shivaji. He invited Shivaji Maharaj to his place and tried to kill him cunningly. But Shivaji was one step ahead of him, he killed him intelligently.

He slowly expanded his kingdom across Western and Central India. He focused his energy on eliminating the tyrants of that era. Most of them were Muslim rulers. Many people consider him anti-muslim but it is not true. His two generals were Siddi and Daulat Khan was Muslims by religion.

He never learned to differentiate between people in terms of caste, creed, colour or religion. Whatever he did was for the welfare of the common people. He ruled for a period of 27 years. He suffered a severe fever which led him to death on 3rd April 1680 in Raigad Fort.

To sum it up, The tales of his bravery still remain to inspire his countrymen for years to come. Their deeds of bravery and heroism have left everyone astonished. He was intelligent, brave, secular, and a good diplomat. He will always be an unforgettable figure in Indian history.

Read About Other Heroes:

The one who is considered the best leader in history, Chhatrapati Shivaji Maharaj took birth on the 19th of February, 1630 to Shahaji Bhonsale and Jijabai in Shivneri Fort in Maharashtra. He was fearless, intelligent, a good diplomat who won many forts without even raising his sword.

Chhatrapati Shivaji Maharaj was inspired by the epics of Ramayana and Mahabharat. Thus, he respected women, each creed, caste and religion. Yes, he defeated many Muslim tyrants but he was not anti-muslim. He just did whatever was the best for the helpless people.

He fought many battles and established The Maratha Empire which made the mighty Mughal Empire shiver in fear. It was tried to kill him cunningly but escaped using his intelligence. He died on 3rd April 1680 due to severe illness. Indian history has not yet witnessed as brave and wise a warrior as he was.