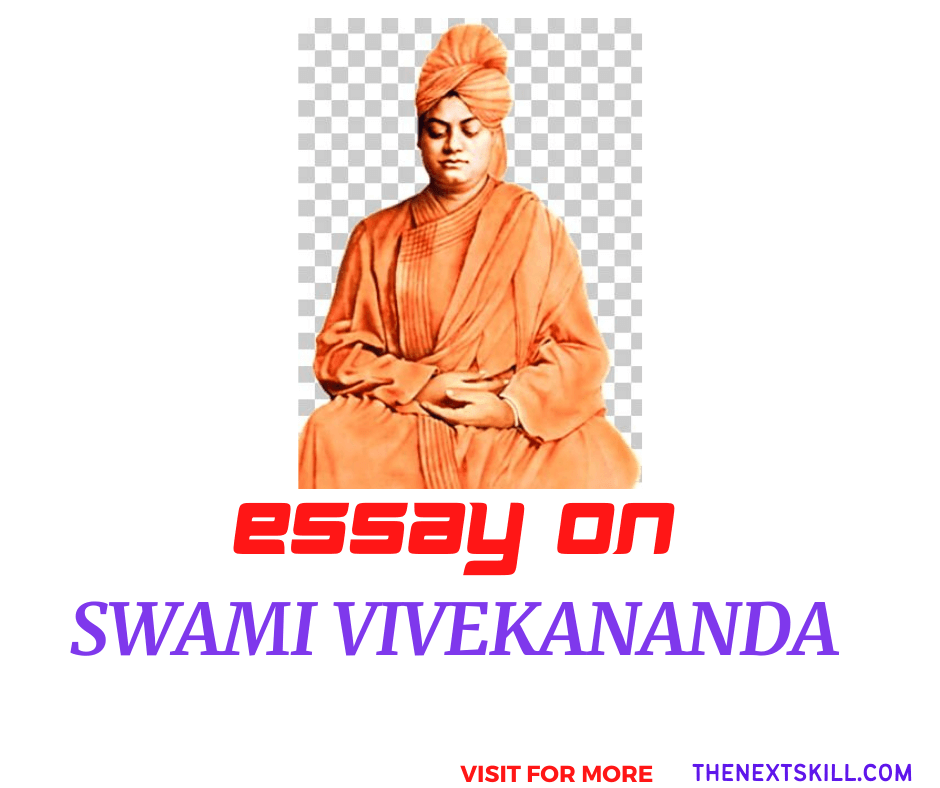 Essay on Swami Vivekananda: He was the one who treated the whole of humanity as his family. When he addressed the people of America as his brothers and sisters, everyone was mesmerised and Americans remember that speech until today.

He was such a great personality who had higher thinking but lived a simple life. The more we describe his greatness the less it will be. In fact, a personality like Swami Vivekananda can not be described in words. He dedicated his life to the upliftment of humankind.

“Greatness lies in the simplicity”. This is what you learn after knowing about such a great personality like Swami Vivekananda. He has no comparison at all. In a life span of only 39 years, Swami Vivekananda spread the message of India’s spiritual heritage across the world.

His best-known presence in the West is his speech at the World Religion Conference in Chicago in 1893. This speech made everyone emotional when he opened his speech by addressing the people as his sisters and brothers. Swami Vivekananda was a spiritual leader, philosopher and social reformist of the 18th century.

Swami Vivekananda was born on 12th January 1863 in Calcutta. His childhood name was Narendranath Datta. His father Vishwanath Datta was an attorney at Calcutta high court. His mother, Bhubaneswari Devi, was a devout housewife. His mother believed in God which influenced Narendra to be inspired towards spirituality.

In 1871, He enrolled at Ishwar Chandra Vidya Sagar’s Institution when he was 8. Then, he studied at the Presidency College in Calcutta. In 1984, he completed his graduation from the University of Calcutta. Narendra was known for his prodigious memory and ability at speed-reading. He was also excellent in swimming, music and gymnastics.

HIS SEARCH OF GOD

Swami Vivekananda had a curious nature from his infancy. He used to believe in facts that were backed by a sensible reason. This mindset made him even question the existence of God. He met many saints to seek an answer to this question.

His search ends up when he met his guru Ramakrishna Paramahansa who brought him from darkness to light. His guru taught him how to meditate and answered him God lives within every human being. So, if we serve mankind, then we can serve God. After getting an answer to this question, he turned into a monk.

The teaching of his guru and Hinduism influenced him to an extent that he travelled all four directions to spread these teachings. When he returned to India he observed the condition of poor and downtrodden people making him sensitive.

Whatever he did or said was an exceptional act. He inspires not only Indians but also the world. He wrote a lot of books including Raj yoga, Jnan yoga, Bhakti yoga, karma yoga etc. We can learn a lot from his books.

Apart from this, he has written many inspirational quotes. His most famous quote is “Arise, awake and stop not until the goal is reached”. This quote helps us to get out of our comfort zone. Another quote is “You can believe in God, until you believe in you”. It simply means God resides within you and God helps the one who helps himself.

In conclusion, Swami Vivekananda was one of India’s leading philosophers who rediscovered Indian philosophy through ancient Hindu scriptures and carried them to each corner of the world. Swamiji breathed his last at Belur Math, West Bengal on the 4th of July, 1902. According to his disciples, Vivekananda attained mahasamādhi.