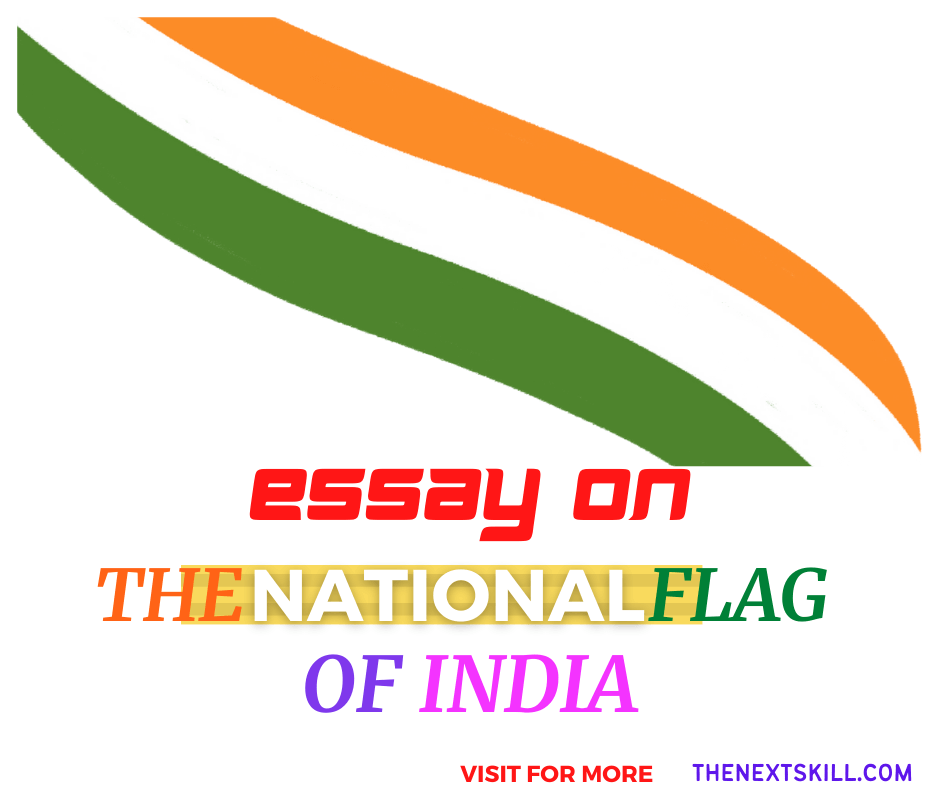 Essay on The National Flag: A national flag works like an identity symbol for a country. Every country owns a unique designed flag that signifies its culture and significance. People of a country respect their national flag as their respect towards the country.

The national flag of India, also known as “Tiranga”, is not the first flag that represents India. There has been a number of flags prior to this one. The current flag had gone through many stages to get its final variation. The insult of the National Flag of India is a punishable offence according to law.

Welcome to thenextskill.com. This page will help you compose an essay on the national flag of India for students and children. This essay can be written as short as 100 words and as long as 500 words. Students of classes 6, 7, 8, 9, 10, 11 & 12 write according to their needs.

500+ Words Essay on The National Flag Of India

A flag is a symbol of a country that helps it to be identified by other countries. Every nation has a distinctive flag that signifies its culture and importance. The Indian flag also has its own identification and significance. The flag of India is also called “Tiranga” or “Tricolour”. This is because it comprises three colours.

These three colours are saffron, white and green. All three colours depict three different meanings. The Indian flag also has a wheel in the centre of the flag. This wheel is called the “Ashoka chakra” which represents the wheel of the law of dharma, Truth or Satya.

HISTORY OF OUR FLAG

The current and sixth flag of India had to go through multiple phases in the past to get its final appearance. The proposal was presented by Mahatma Gandhi first. Then, it was designed by Pingali Venkayya who was also a freedom fighter. The three colours were chosen so carefully that none of them depicts a sectarian association.

The Indian flag was adopted on July 22, 1947, during the meeting of the Constituent Assembly. The Tricolour flag was approved ahead of India’s independence from British rule on August 15, 1947. There was a “Charkha” (Spinning Wheel) in the centre that was replaced by The Ashoka Wheel.

WHAT OUR FLAG SIGNIFIES

As we have discussed above that our flag consists of three stripes of saffron, white and green colours from uppermost to lowermost. Each one has a different meaning. The saffron stripe depicts passion, courage and sacrifices. This strip is dedicated to the heroes who sacrificed their lives for the nation.

The white colour stripe is a symbol of simplicity, peace and truth. The white band also has a blue wheel having 24 spokes that illustrate 24 hours and the wheel depicts the wheel of Dharma. The last band is green in colour showing the fertility, growth and auspiciousness of the land.

SHOULD KNOW FACTS ABOUT OUR FLAG

To sum it up, The flag of India is the pride of the nation. It depicts the Indian culture well. Every countryman should understand the significance of their national flag and show the utmost respect to it. It is the intense pleasure to see the Indian flag flying at the highest for every Indian.

Faq’s- Essay on the national flag of India