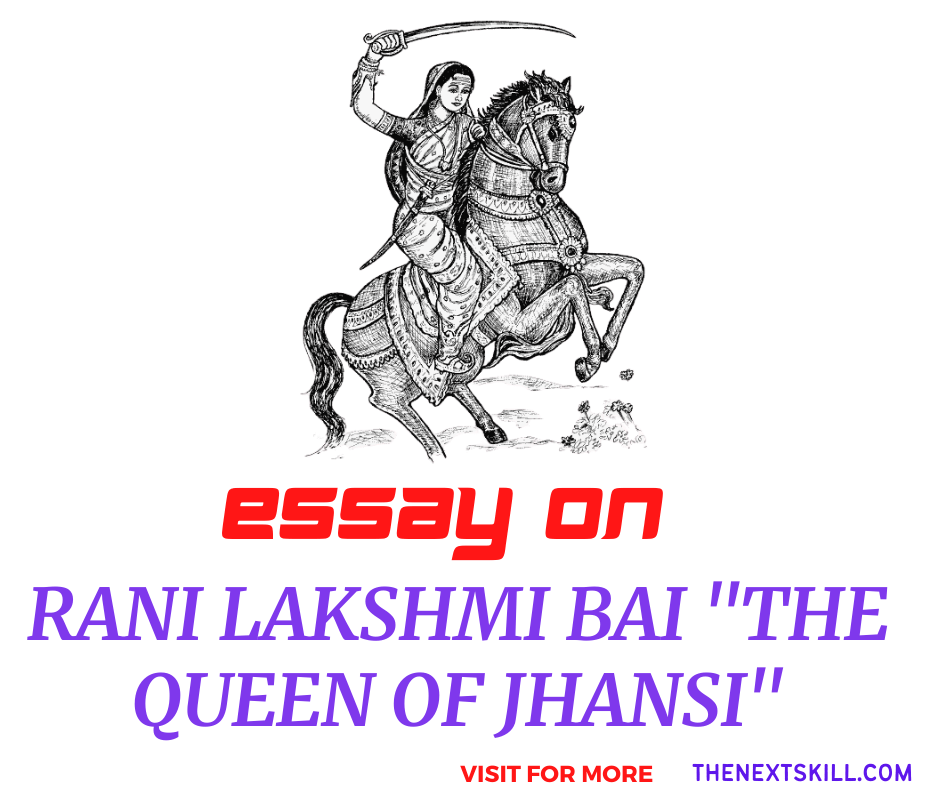 Essay on Rani Lakshmi Bai: Bravery does not favour any specific gender. This was the lesson that Rani Lakshmi Bai has taught the world. She was so courageous that even her enemies have sung her glory. India is blessed to have such a brave woman who sacrificed her life but did not give up.

Welcome to Thenextskill.com. This page will help you compose an essay on Rani Lakshmi Bai (The queen of Jhansi). You can utilize the text to write short notes, short paragraphs, speeches and articles on her. The given essay is fit for the students of classes 6, 7, 8, 9, 10, 11 & 12.

Rani Lakshmi Bai is an unforgettable warrior in the history of India. She is popularly known as Rani of Jhansi. Earlier, she was known as Manu Bai or Manikarnika. She was born like a princess but died like a warrior. We will never forget this exceptional figure who taught us the real meaning of bravery and patriotism.

If we observe at present conditions, we will discover that women have several limitations on them. We should include them in every opportunity so that they can give their best for the community, society, and country. Rani Laxmi Bai is one candid example.

Manikarnika was born on 19th November 1828 to Moropant Tambe and Bhagirathi Tambe at Kashi (Varanasi). When she was only four years old, her mother passed away. After the death of her mother, she and her father moved to Bithoor where she was brought up by her father in the palace of Peshwa Baji Rao. She grew up as a beautiful, smart and brave girl.

Since her childhood, she was very fond of learning horse-riding, sword fighting, Shooting and martial arts. She was also a passionate reader. She practised sword fights with Rao Sahib, Nana Sahib, Tantia Tope, and other boys who came to Peshwa’s court. Her presence of mind was exceptional.

In the year 1842, at the age of fourteen Manikarnika was married to the Maharaja of Jhansi, Gangadhar Rao Newalkar. According to the Maharashtrian tradition, women were given a new name after marriage. So, she was called Rani Lakshmi Bai afterwords.

After the death of the Maharaja, The government of Jhansi was given to his widow Lakshmi Bai. After some time, the British Government applied the Doctrine of Lapse, rejecting Damodar Rao’s (adopted child) claim to the throne and annexing the state to its territories.

When Lakshmi Bai Got to know that the British government annexed her Jhansi to its territory, she cried with anger and said, “main apni Jhansi nahi doongi” (I shall not give my Jhansi). In 1854, she was ordered to leave the palace.

In 1857, the first rebellion began against British rule, The rani of Jhansi took part in it. She captured the Jhansi fort on June 7, 1857, and began to rule as a Regent on behalf of her minor son, Damodar Rao. On 20th March 1958, the British sent a giant force under Sir Hugh Rose in order to recapture Jhansi.

A fierce battle took place in which both parties suffered grave losses. She was supported by Tantia Tope. Eventually the British recaptured the fort by betrayal. Soon, with the help of Tantia Tope and Rao Sahib, she captured the Gwalior fort from Jivaji Rao Scindia.

Scindia requested the British for support and they willingly extended their support. In the battle, she fought bravely and with gallantry heroism. She was wounded by one of the English horsemen and collapsed. She martyred on 18th June 1858 at Kotah-ki-Serai in Gwalior.

To sum it up, India is blessed to have such a brave woman who sacrificed her life but did not give up. The lesson she taught us is “Bravery does not favour any specific gender.” She was so courageous that even her enemies have sung her glory. Rani Lakshmi Bai is a glorious example of patriotism and national pride. She will always stay in the heart of every Indian.