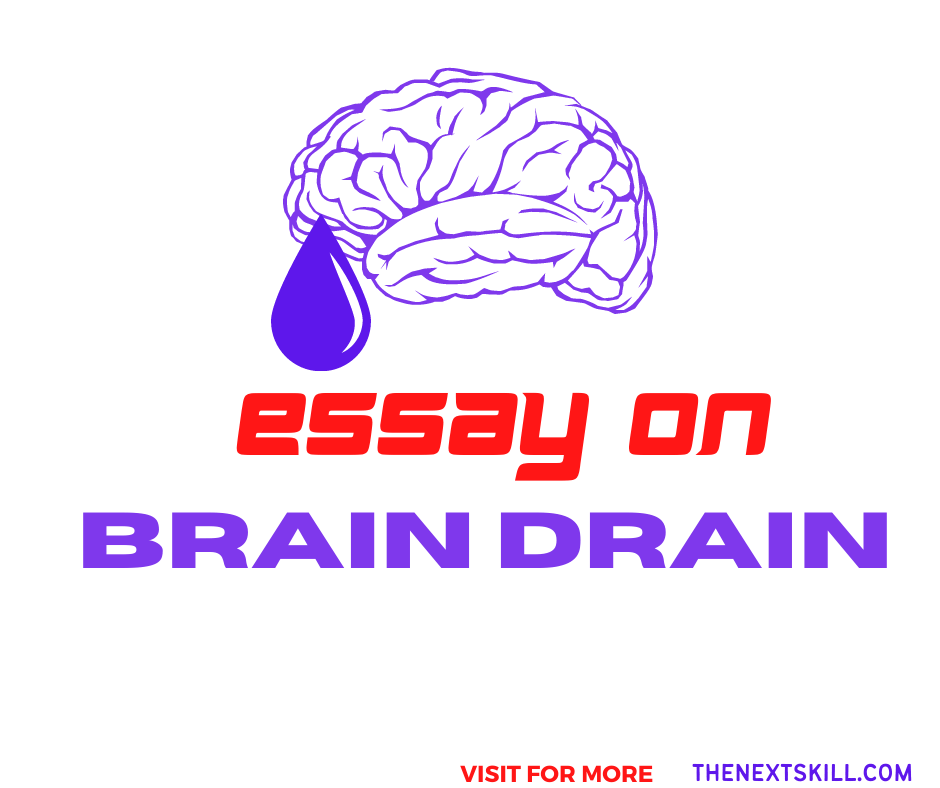 Essay on Brain Drain: When I heard the phrase “Brain Drain” for the first time, I thought it might be a disease related to a person’s brain. I was partially wrong and partially correct. Yes, Brain drain is a disease but it does not belong to a person instead it belongs to a country.

Brain drain refers to the immigration or migration of skilled and talented people from a country to a developed country. For a country, it can be considered the greatest loss of the country because those people could have contributed to the nation’s progress but unfortunately, they leave their country.

INTRODUCTION- Human resources are counted as one of the greatest factors for a country’s development and progress. When skilled and talented people of a country depart to a developed nation for earning a high income. This process is called Brain drain. Brain Drain is a subject of concern for any country.

The term ‘Brain Drain’ was first used by the United Kingdom in 1960 when the skilled workforce began to immigrate from under-developed or developing countries to developed countries. Human capital flight is another name for this phenomenon.

With the advent of globalization, opinions, ideas, talents and skills in the form of labour began being exchanged between nations.

CAUSES- There are two major causes of migration of people from their country to a new and developed one. The first cause of Brain Drain could be turmoil within a country. The second cause could be better pay in other countries/organizations than that in the home country.

Some other causes can be Underemployment, Political instability, poor quality of living, fewer opportunities and limited access to facilities etc.

EFFECTS- Under-developed and developing countries do need skilled and talented people in their country to lead to the path of progress. In this situation, Brain drain is a concerning problem in these countries. Countries need to control brain drain as much as possible.

REMEDY- To hold skilled and talented workers in their native places, it is important to provide them with enough work opportunities and living facilities. For this purpose, the government need to encourage entrepreneurship in the country which can create a significant amount of employment.

Developed nations must help developing countries so that every human on this planet can have a good standard of living.

CONCLUSION- Brain Drain is a subject of gradual concern for any country. Not only does it result in the loss of a nation’s creative geniuses, but the brain drain also brings about a potential economic decline in the country’s scenario. There is a need to trash out this issue from the country.

“Brain Drain”, When I came to know this term for the first time, I thought it might be a disease related to a person’s brain. After searching about this term on the internet, I found out that I was somewhat wrong and somewhat correct.

Yes, Brain drain is a disease but it does not belong to a person instead it belongs to a country. It refers to the departure of a skilled and talented workforce from a country to a developed country. It is also known as Human capital flight. It is a subject of concern for any country.

There are many types of brain drain. But three of them are known popularly. These three types cast maximum brain drain in any country.

This refers to the migration of highly skilled and talented professionals to other countries in search of better-paying jobs. It creates a negative effect on the economic development of the homeland.

This refers to the departure of skilled, talented and experienced workforce from one organization to another. This type of brain drain can benefit the organisation but can harm the country.

This refers to the movement of trained and skilled workers from one industry to another for a better salary. This can cause a shortage of experienced workforce in the industry and eventually can harm the progress of the nation.

If we think about the causes of brain drain. It depends on the individual why one is migrating to another country, industry or organisation major and common causes caught that caught our attention.

This is the biggest reason for brain drain in any country. Who does not like to earn more? This is the reason behind the departure of many. They chase a high income so that they can have a good standard of living.

This is another great cause of brain drain in a country. In the search of good earning opportunities, people usually prefer to migrate to a better place. For instance, villagers migrate to towns, a townsman migrates to a city, a citizen migrates to a metro city etc.

The second major cause of brain drain is Political instability and Internal Turmoil. When a country faces this kind of situation people start migrating to other better places.

Some people migrate to another country in the search of high standards of living which is currently not possible in their country.

HOW THIS PHENOMENON IMPACTS A NATION

Human resources are counted as one of the greatest factors for a country’s development and progress. Brain Drain is a subject of concern for any country. Under-developed and developing countries do need skilled and talented people in their country to lead to the path of progress.

In this situation, Brain drain is a concerning problem in these countries. It directly impacts the economy of the country. Furthermore, it becomes a reason for the decline of the progress of the country. In the absence of creative minds, the coags behind in the fields of technology, research and development etc.

To prevent something from happening, it is needed to examine the reasons behind it. It makes the process easier. If we talk about the reasons for brain drain. They are very clear to us. Once these reasons disappear, we don’t need to prevent anything. Everything will be done automatically.

The employment rate should be alleviated – more jobs should be provided. More positions should open for hire. All the sectors in the country should be modernized; scientific and technological advancement should be facilitated.

To sum it up, Brain Drain is an across-the-board phenomenon these days. Many developing nations suffer from this problem of losing their talent to other countries. Furthermore, the government must take stringent measures to control this loss of talent.