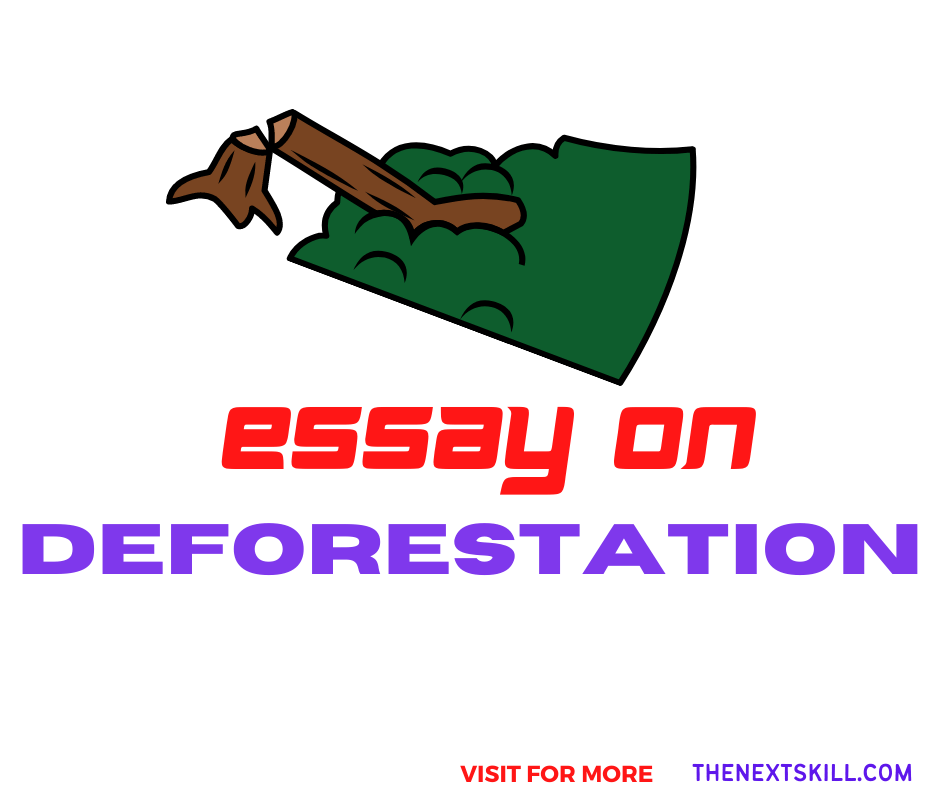 Essay On Deforestation- Trees are a very important part of our environment on the earth. They balance the ecosystem of the earth and help in executing the life process effortlessly. They are very helpful to every living being on the planet. We humans take benefit from trees in several ways.

Trees give us food, medicines, rubber, wood etc. For the sake of greed, we are cutting trees uncontrollably. Deforestation is the process of cutting down the trees that cause the emptying of the forests. It is a threat to the environment and the existence of life on earth.

Welcome to Thenextskill.com. This page will help you compose an essay on deforestation in simple English suitable for students of classes 6, 7, 8 and higher. By getting an idea from this deforestation essay, you can quickly write an essay in 100, 150, 200, 250, 300 & 500 Words.

✔ How To Save Water Essay

Deforestation refers to cutting down a large number of trees and emptying forest areas. There are diverse reasons behind these human activities such as logging or wood extraction, infrastructure expansion and agricultural expansion etc.

Deforestation is dangerous to the environment because it causes a lot of increase in carbon emissions and modifies the natural ecosystem. It also contributes to climate change because plants release the reserved carbon into the atmosphere as carbon dioxide when they are cut down.

Trees are demolished to make way for urban development and agricultural purposes. Deforestation is a severe problem and we must prevent and control cutting down precious trees. The government is putting all its power to prevent deforestation at all levels. Individuals also need to contribute as well.

INTRODUCTION- Deforestation refers to the removal of trees from a forest for land acquisition. This land is used for agricultural use, making houses, commercial purposes and infrastructure development. Deforestation is more intense in tropical and subtropical forests.

In the Global Forest Resources Assessment 2020, the global rate of net forest loss was 7 million hectares per year from 2010-2020.

CAUSES- The primary cause of deforestation is land acquisition for agricultural purposes. Agriculture alone cast 80% of deforestation. The next cause on the list is the need for furniture, match sticks, rubber, paper etc. The high demand causes more trees cut down.

The third reason is infrastructure development for attaining access to specific areas. Trees are cut to build roads and buildings for the expansion of cities.

EFFECTS- Deforestation affects the ecosystem of the earth. It is a threat to the environment and the living being on the planet. It causes an increased amount of carbon dioxide in the atmosphere which leads to global warming and climate change.

SOLUTIONS- Deforestation is a severe problem for all living things on the planet in the long run. We need to take preventive measures to control and prevent deforestation. Government should ban deforestation and a tough penalty must be imposed on those found involved in deforestation. Individuals can plant as many as trees possible to refund the loss of trees.

CONCLUSION- Deforestation is a critical issue for the environment. We must see into this matter and should do as much as possible. At least, we can plant trees to fulfil the loss our environment bores. Government must start initiatives that encourage reforestation and prevent deforestation.

Main Headings of Essay on Deforestation

“Deforestation” is not a complex term to understand as its name suggests it is the process of clearing off the forests. With the growing population, we need increased resources one of which is land. But we can’t grow or expand land. One way is to clear off forests to get more land.

It involves the vacating of a gigantic area occupied by dense trees, bushes, and plants that have been growing here for many years. Deforestation is done for various reasons but we can say that the chief purpose behind this act is purely land acquisition because land is a finite resource.

There are various causes of deforestation. Most of them are human-induced but some natural causes also contribute to deforestation.

As we previously discussed, land acquisition is the primary reason behind human-induced deforestation.

When we need to access some specific location that is difficult to reach out to, government take the decision to build roads and develop infrastructure.

With the growing demand for food products, the demand for agricultural land also increases. To fulfil this demand, we clear off forests and convert them into crop fields.

Forest fire is one of the natural causes that performs deforestation. Every year we hear news of forest catching fires.

The increasing demand for wood drives people to cut trees on a large scale. They cut the trees uncontrollably which leads to deforestation.

Deforestation is not a good thing to exist in the world. It means it impacts the world in a negative way. Take a look at how deforestation impacts us and the world.

Global warming is one of the consequences of the change in our environment. The temperatures are reaching their extreme points and season are delaying year by year.

Deforestation is a cruel act towards animals who live in forests. They are helpless. They lose their homes and die out of hunger and lack of protection.

HOW TO GET RID OF DEFORESTATION

Deforestation can be prevented by mixed countermeasures. First of all, we should incentive afforestation which is the act of growing trees in the forest. This will help to resolve the loss of trees due to deforestation. Furthermore, the use of plant-based products should be promoted so as to grow the industry of tree-based companies.

Other than this, people must grow plants in their homes. That will help the environment to regain its ability. Government must punish the people involved in illegal deforestation.

To sum it up, Deforestation is the worst thing happening to the environment. Not only does it destroy the environment but also depletes biodiversity. Forests must be saved at all costs and every sincere attempt for their restoration must also be made.