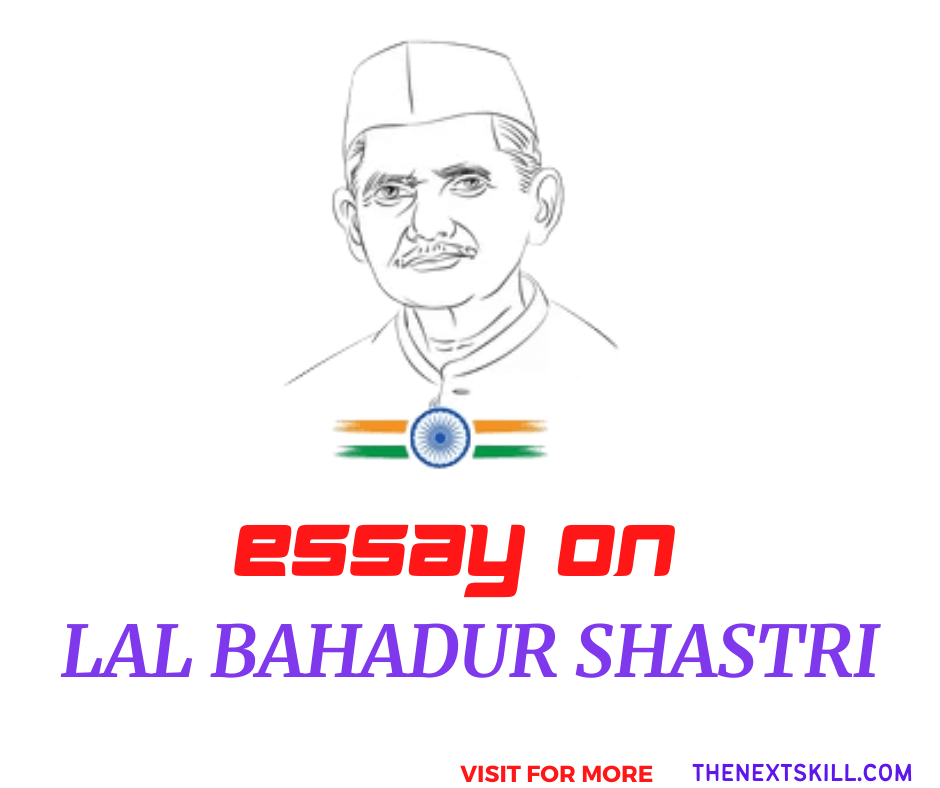 Lal Bahadur Shastri also contributed to the freedom revolution. He was very interested in the ideology of Mahatma Gandhi. In fact, he became his follower after listening to one of Gandhi’s speeches delivered at Banaras Hindu University.

Welcome to Thenextskill.com. This post will provide you with an essay on a great leader and personality of India- Lal Bahadur Shastri. This essay on Lal Bahadur Shastri is written in word length between 400-500 Words. But it can be cut as short as 100, 150, 200 Words.

Lal Bahadur Shastri needs no introduction. Being an Indian, Some day or other, you might have listened about him. Shastri was one of the recognised leaders in India. Apart from India, he is respected all over the world. His famous slogan was “Jai Jawan Jai Kisan”.

Lal Bahadur Shastri was a true son of Mother India. Shastriji had never been greedy for any position or respect. He proved this fact on many occasions during his political career. In fact, It is said that he used to keep his resignation letter in his pocket. How can one doubt such a bold leader?

Shastriji was born on 2nd October 1904 in a very poor family in Mughalsarai, Uttar Pradesh. His father Shri Sharda Prasad was a teacher. When Shastriji was only one year old, his father passed away. His mother’s name was Ramdulari Devi. He was brought up by his maternal grandmother. He had his early education in Varanasi.

At the very young age of 17, on Gandhiji’s appeal to boycott schools and colleges, he left his studies and joined the non-cooperation movement. As a result, he was sent to jail. After his release from jail, he started his studies at Kashi Vidyapeeth.

His Acharya Late Dr There were Bhagwandas, Acharya Narendradev, Babu Sampoornanandji and Shri Prakash Ji. He passed the examination in the first division and then he was given the title Shastri Scholar.

Shastriji’s entire life was spent serving his country. Shastriji had an important contribution in the freedom struggle. He was sent to jail seven times during the freedom movement. He had to tolerate the torture of imprisonment for a total of 9 years of his life.

In 1928 Shastri became an active member of the Indian National Congress. He was jailed for two and a half years. Later, he worked as the Organizing Secretary of the Parliamentary Board of U.P. in 1937. In 1940, he was again sent to prison for one year, for offering individual Satyagraha support to the independence movement.

On 8 August 1942, Mahatma Gandhi issued the Quit India speech. Shastri, who had just then come out from Jail, travelled to Allahabad. For a week, he sent instructions to the independence activists from Jawaharlal Nehru’s home, Anand Bhavan.

When Chinese aggression took place in the year 1962, India had to face another aggression from Pakistan in the year 1965. Lal Bahadur Shastri clarified that India will not sit quietly. He provided the liberty to the Security Forces of the nation to retaliate.

Shastri said, “Force will be met with force”. The war between India and Pakistan ended on 23 September in the year 1965 after the United Nations asked for a ceasefire.

To sum it up, the second prime minister of Independent India Lal Bahadur Shastri was a generous man and a wonderful leader who was rewarded by “Bharat Ratna“. He was the man of his words and did his best for the country. He always strove to make India better and even better. We Indians will always give him a place in our hearts.