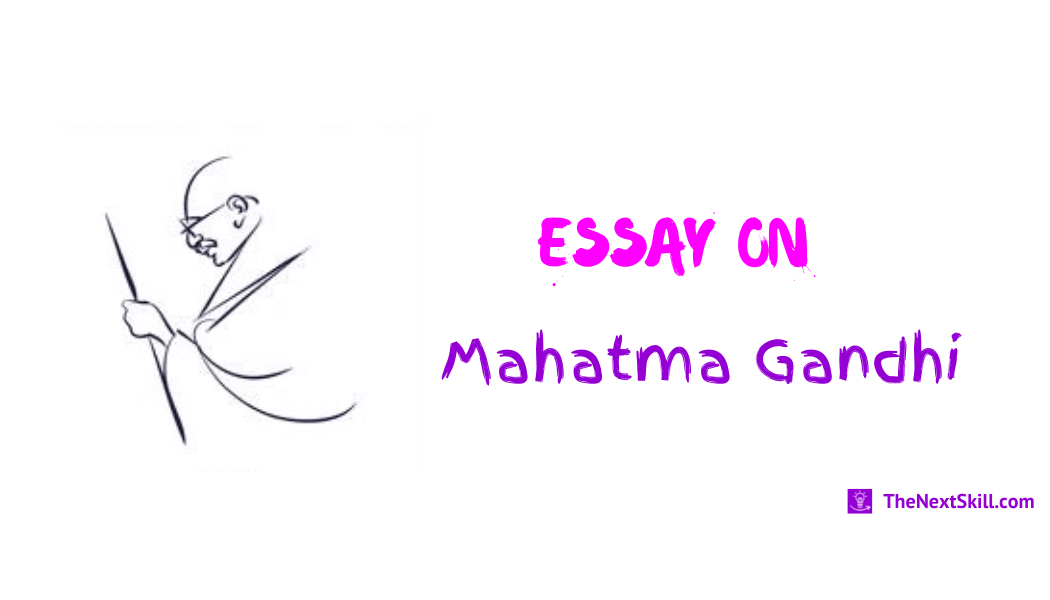 Essay on Mahatma Gandhi: There are many great personalities who took birth on the holy earth of India. Mohandas Karamchand Gandhi is one of those whose name is written in the golden texture in Indian history. He served his country as a father. Hence, he is also known as The Father of the Nation.

On the occasion of Gandhi Jayanti, there are various essay competitions conducted in schools and colleges. Students have to share their own unique thoughts on Mahatma Gandhi. This competition actually is conducted to recall the sacrifices of Gandhi Ji (Baapu).

Welcome to TheNextSkill.com. This site is intended to help students and learners. This page will help you write engaging and attractive compositions. Below are some essays on Mahatma Gandhi in 100, 150, 200, 250, and 500 words. You can read them to compose one of your own. You can read a full essay writing guide.

An Essay On Mahatma Gandhi | 150 Words

Mahatma Gandhi was an Indian freedom fighter. He helped our country to get freedom from English Rule. His full name was Mohandas Karamchand Gandhi. Mahatma Gandhi took care of his country as a father and hence he is known as the father of the nation and Bapu.

He was born on 2nd October 1869 in Porbandar, Gujarat. In his childhood, he was a shy person who loved to read. He went to London to study law and became a barrister in 1891. His life was full of struggles but he did never lose their self-confidence.

Mahatma Gandhi always fought against the evil spread in society. He always ran on the path of non-violence. Even if Mahatma Gandhi did not like politics, his name is counted as one of his most renowned political figures. This is because he had to descend into politics for public welfare. He will always be alive in our hearts.

Mohandas Karamchand Gandhi is a name in the golden texture of Indian history. He was an outstanding Indian patriot. His whole life contributed to serving his nation. Indians got freedom from British rule because of their enormous efforts. He was an appreciable philanthropist with an effective personality.

Undoubtedly, Each Indian knows about him if not, we can conclude that person not to be an Indian. He lived a hard life that we can’t even imagine living. He was also a great leader. If he were alive, I would be his follower but unfortunately, we can only follow their teachings now.

You can see: More Introduction Ideas

About This Great Personality

2nd October 1869, was the day when India got a great patriot. He was born in an Indian Hindu family at Porbandar in Gujrat. At that time his father Karamchand Uttamchand Gandhi was Diwan ( Chief Minister) of Porbandar. Putlibai Gandhi was the mother of the father of the nation, Mahatma Gandhi.

In 1883, He got married to Kasturbai Makhanji Kapadia. He had four sons Harilal, Manilal, Ramdas, and Devdas. After passing Matriculation (10th grade), he went to London for higher education in 1888 and became a barrister. He was shot dead by Nathuram Godse on 30 January 1948.

In South Africa, He campaigned against the British for the violation of dark-coloured Asians and became successful. There, he struggled against numerous difficulties. He noticed the maltreatment of the dark Indians by the white men. He was also annoyed and abused by the white. He was travelling on a train one day. He booked a ticket for the first-class compartment but he was stopped and switched out of the compartment.

After observing the violation of Indians by Britishers, Gandhiji started a fight against this unfair and rough treatment. He conducted Satyagraha in Borsad, Champaran, and Dandi March. He began Dandi March on 12th March 1930 with 78 other people from the satyagraha ashram in Ahmedabad to Dandi to detain the law of salt and got succeed

He was carried to jail several times. He inaugurated the Non-cooperation Movement in 1930 and in 1942, the Quit India Movement. At last, on 15th august 1947, India got freedom from English rule.

Even if Mahatma Gandhi did not like politics, his name is counted as one of his most renowned political figures. This is because he had to descend into politics for public welfare. Most noteworthy, despite a lot of hardships, he did never lose his self-confidence. He was such a rigid and exceptional personality.

[Must Read- Essay on INDIA My Country]

Mohandas Karamchand Gandhi is a great and unforgettable personality in Indian history. He is also known as Bapu and the father of the nation. His name is one of the Indian freedom fighters and true patriots. Professionally, he was a lawyer but dropped his practice as a lawyer due to a lack of interest. He served his country throughout his life to raise the country’s sovereignty.

He also was a political ethicist who always made moral judgments about political actions and political agents. In 1914, the Sanskrit word “Mahatma” was applied before his name making it Mahatma Gandhi which is now used globally. He was shot dead by Nathuram Godse on 30 January 1948.

Gandhi JI was born in a Hindu family on 02 October 1869 at Porbandar in Gujrat. His father Karamchand Uttamchand Gandhi was diwan of Porbandar state. The name of his mother was Putlibai. When he was 8 years old, Mahatma Gandhi took admitted to a local school in Rajkot where he studied arithmetic, history, geography, and the Gujarati language. After two years he entered High school in Rajkot.

He was married to Kasturbai Makhanji Kapadia. In 1885, His father died when he was only 16 years old. He went to London in the year 1888 for higher education for three years. Mahatma Gandhi attended University College, London, and studied law.

Mahatma Gandhi was shy in nature in his childhood. He was an average school student. His only friends were books. He was not interested in games. he was a vegetarian person and very conscious about their health. He also avoided eggs and milk. He used to do experiments with his diet. In his experiences, he found that “one man’s food may be poison for another”.

In 1921, he adopted wearing a dhoti woven with a handspun on a charkha (spinning wheel) as a sign of India’s rural poor. He was a religious person and adopted brahmacharya for a long period of time.

In 1893 when he was in South Africa, he had to face discrimination due to his heritage and skin colour. He was not allowed to sit with European passengers on the train. He was told to sit on the floor and then beaten when he refused. He campaigned there against the British for the violation of dark-coloured Asians and became successful.

Mahatma Gandhi struggled a lot for Indian independence. He joined Indian National Congress and observed Indian issues. In 1942, he demanded immediate independence and was imprisoned then. After a lot of effort, our country became free on 15 August 1947.

Inspiration from his life

He is an inspiration for us. We can learn a lot of things from his life. We can’t put ourselves in his shoes. He taught us how to fight for our rights, how to live a life, and to be kind to others not only to humans but to animals. We can learn the importance of vegetarianism in his book “The Moral Basis of Vegetarianism” We should learn the deep meaning of his quotes and learn their teachings. We also got inspired by his life and how to take a stand against injustice.

To sum it up, Mahatma Gandhi took care of his country as a father and hence he is known as the father of the nation. Even if Mahatma Gandhi did not like politics, his name is counted as one of his most renowned political figures. This is because he had to descend into politics for public welfare. Most noteworthy, despite a lot of hardships, he did never lose his self-confidence. He was such a rigid and exceptional personality. He taught us the great lesson of Ahimsa (Hindi translation of non-violence).