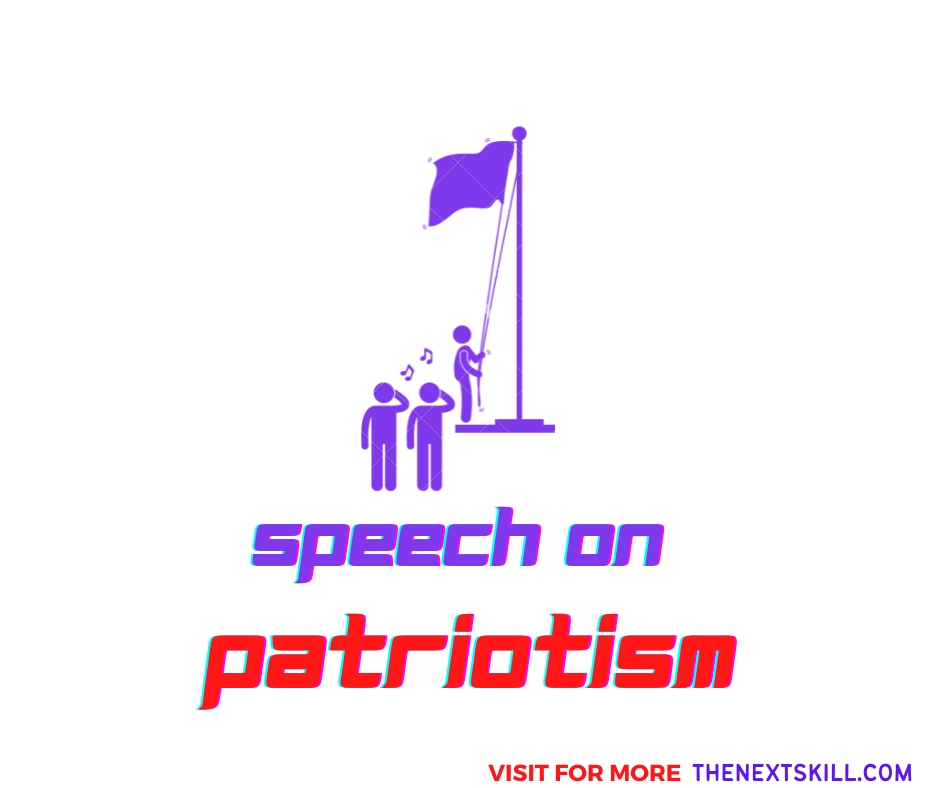 During the struggle for freedom, we have seen an immense sense of patriotism in freedom fighters. They fought for the country and freed their country from the shackles of British rule. But to be a patriot, it is not necessary to be violent or fight, one can be a patriot in many ways.

Welcome to Thenextskill.com. this page will help you compose a short and long speech on patriotism. You can also read about great patriots like Mahatma Gandhi, Jawahar Lal Nehru, Bhagat Singh and A.P.J. Abdul Kalam.

Good Morning Everyone, First of all, I want to wish you all the best for the day. I am here to say a few words on patriotism. I am very glad to have this tremendous opportunity.

More or less everyone loves his/her country. This love and loyalty for the country is called patriotism. Our freedom fighters are the perfect example of patriots. But being a patriot not always requires fighting or spreading violence. One can also serve his country in many ways.

For example, you can help your country by teaching at least one child who is unable to afford education. You can encourage women empowerment, you can spread awareness about multiple wrong practices prevalent in the country etc.

If everyone becomes a true patriot, nothing can prevent our country to head over the path of progress and prosperity. Thank you for listening to my speech.

A short Speech On Patriotism [2 Minutes]

Reputable Principal, respected teachers and my dear friends! First of all, I would like to welcome all of you and also thank you all for having me a chance to deliver a speech on Patriotism.

Preferring Nation’s interest that of your own is a sign that you are a patriot. From childhood, we have been listening to many stories about our great freedom fighters who got our country free. They devoted their whole lives for the country. They were great patriots who strove for the betterment of the country.

No doubt every countryman loves his/her country but making some efforts which can help your country to be progressive is the real patriotism. Having 24 hours a day, one can dedicate at least an hour to work for country whereas many devoted their whole life.

With time, the feeling of patriotism is fading away and these days this feeling is rarely seen in the younger generation, this is because nowadays people are busy in their lives. They are becoming very selfish. It is the need of the hour to spark a sense of patriotism in younger ones for the constant progress of the country.

Thank you again. This is all I want to say.

A long Speech On Patriotism [4 minutes]

Greetings to everyone present here.

Today we all are here to celebrate the occasion of Independence day. Of course, the 15th of August is a great day that makes us remember the great patriots of the nation who got us freedom. I feel lucky to have a chance to deliver a speech on Patriotism.

Patriotism refers to a virtue of a person that pushes him to work for his country selflessly and make it better. The number of patriots in a country plays a major role in the country’s progress. In today’s world, everyone is becoming more selfish or in the words, everyone is very busy with their own stuff.

Patriotism is a quality that every person should have. A country full of patriots certainly turns out to be a better place to live in than a place where people always fight with each other in the name of religion, caste, creed and other issues.

The Great Patriots of India

In the past, especially during British rule, many people came forward with an intense sense of patriotism to get the country rid of British rule. They set an example for all of us and also they inspire us to do something for the country. I will talk about some of them but I am addressing all the patriots.

Whenever We talk about freedom fighters, the first name that comes to our mind is Mahatma Gandhi. His contribution towards the freedom struggle in India is known by all as he has led many freedom movements against the British. He is a perfect example of “simple living high thinking”. He dreamed of India’s independence and achieved it.

Shaheed Bhagat Singh is another name on the list. He was determined to get India free from the clutches of British rule. He was a part of several freedom movements and campaigns. He devoted his life to this mission and died as a martyr for the love of his country.

Let’s talk about some female patriots of India. Not only men but women of India also possess the quality of bravery and patriotism. Rani Laxmi Bai and Sarojini Naidu were the female freedom fighters who fought against Britishers.

The terms nationalism and patriotism are often used similarly, however, there is a difference between the two. Patriotism means keeping the country’s interest first rather than of ones own and contributing towards the country’s improvement.

Nationalism, on the other hand, means feeling pride in one’s country irrespective of noticing the positive and negative points. In my opinion, patriotism is much better than nationalism.

Unfortunately, today no one is concerned in the nation’s interest. Just think if our freedom fighters would have thought this way then we would have been a slave until today. We should remember that we are still a developing country and internal brotherhood and patriotism is our need to become a developed one.

This is what I want to say on this occasion. Thank you…