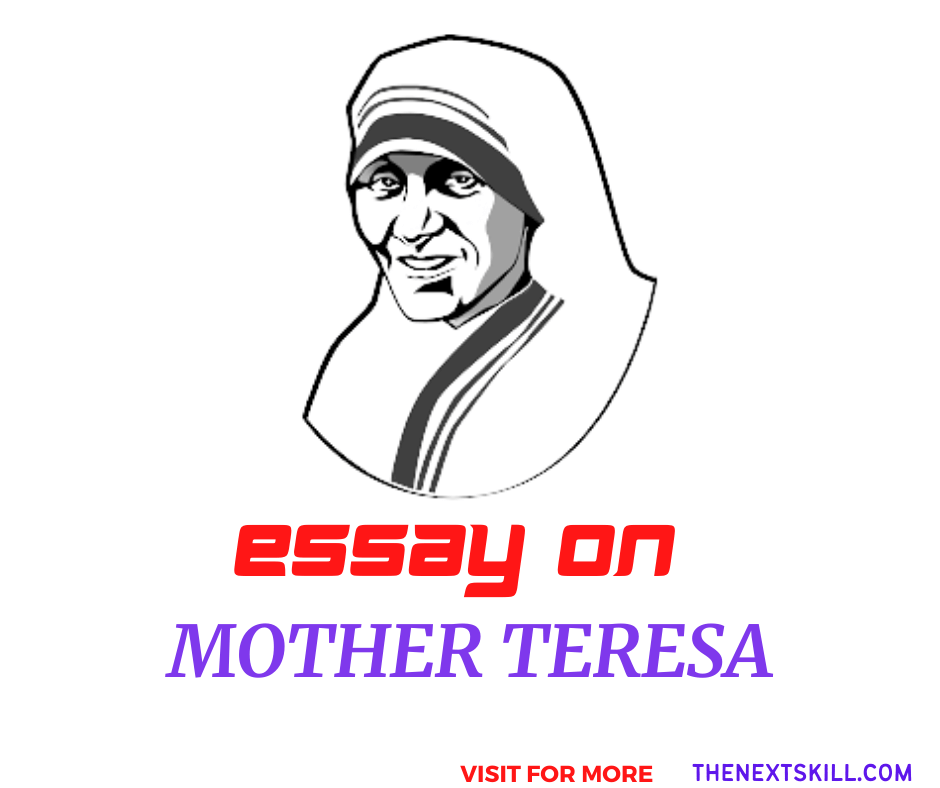 Essay on Mother Teresa: What makes a human different from other living beings? We can count a lot of things. But compassion is something that makes a person a superhuman being. A forthright example was Mother Teresa who helped poor and needy people throughout her life.

It requires hefty courage to do something she did. Leaving the materialistic world, she chose to serve the needy and poor people of a country to which she was not even belonged. She did not bear birth to any child, but she treated everyone as her child.

Mother Teresa was a pious lady born as Agnes Gonxhe Bojaxhiu, a catholic Christian. Agnes was a very brilliant student and a beautiful girl. She was born on the 26th of August in 1910 in Macedonia. She was intensively inclined towards religion since her childhood.

At the only age of 18 years, she left his home to become a nun. She then reached India and started her journey of serving the needy people. She educated poor children and provided shelters to needy people. Her mission was very tough but she managed to sustain it for years. She is an inspiration for millions of people.

Most people believe in a particular religion but only a few come forward to help others. This kind of help seems negligible when we compare it with the deeds of Mother Teresa. Then, What drove Mother Teresa to help the poor and needy? Definitely, It is compassion and mercy.

When she was born on the 26th of August in 1910, she was known as Agnes. Since her childhood, she was very helpful and pious by nature. She became a nun when she was only 18. She started her journey as a teacher in convent schools and end up turning into a philanthropist.

She spent half of her life teaching and the rest of her life serving the poor, the needy and sick people. She founded “Nirmal Hriday” and “Missionaries of Charity” which are social welfare organisations. Later, she also built many schools, hospitals, shelter homes in India and abroad.

Mother Mary Teresa Bojaxhiu was an Albanian-Indian Roman Catholic nun and missionary. She was born on the 26th of August in 1910 in Skopje (now the capital of North Macedonia). After living in Skopje for eighteen years, she moved to Ireland and then to India, where she lived for most of her life.

She devoted her whole life to the service of the poor, the needy and the sick. She established organisations like “the Missionaries of Charity” and “Nirmal Hriday”. Mother Teresa received many awards like Noble Peace Award, Bharat Ratna etc.

When she was born, she was known as Agnes Gonxhe Bojaxhiu. She was a very brilliant student. Agnes was very helpful since her childhood. Additionally, she was inclined toward religion. She used to spend a significant amount of time in the church. At the age of 18, she left her home to become a nun.

After, she moved to Ireland, then Sri Lanka and finally reached India. She lived in Kolkata and began to teach history and geography in convent schools. After seeing the bad condition of poor and sick people she began his journey to serve the needy.

She started her journey of humanity by establishing an open-air school where she began teaching poor children. For doing this good work of teaching the poor and helping needy people she needed a permanent residence. So, with the support of the church and the people, she established a missionary where poor and homeless can live.

She spent half of her life teaching and the rest of her life serving the poor, the needy and sick people. She founded “Nirmal Hriday” and “Missioanaries of Charity” which are social welfare organisations. Later, she also built many schools, hospitals, shelter homes in India and abroad.

Death is the only truth for everyone. One day or another everyone has to die. This is the reality that snatched the angel of the poor from us. On the death of Mother Teresa, the homeless became orphans once more. They shed tears and remembered her to their last breath.

She died on 5 September 1997 due to a severe cardiac arrest. Teresa’s death was mourned in the secular and religious communities.

To sum it up, Mother Teresa was an idol of Mercy and Compassion. She became a global icon for her work of serving the poor and the needy. She gave a true definition to her name “Mother Teresa”. She loved the people like a mother. India and Indians will never forget this great personality who helped the countrymen in their time of need.