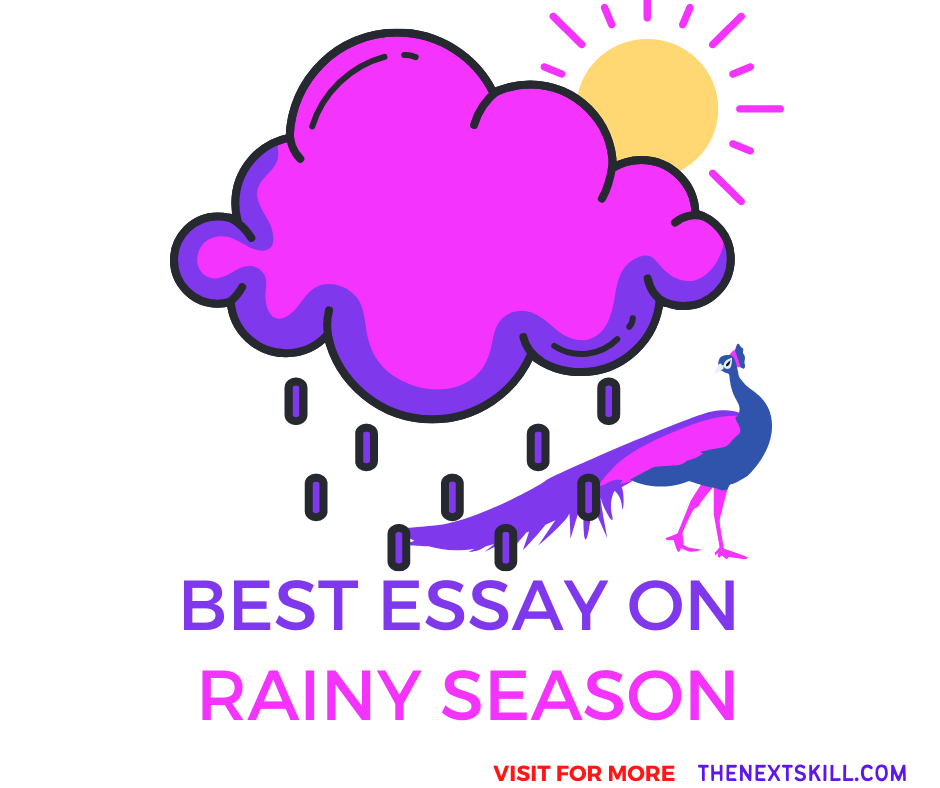 Essay on Rainy Season- The rainy season is the most liked season for me. I can make you count several reasons why I like it the most. The environment looks as much awesome as we are in heaven. Nature reveals its true meaning.

The trees look bathed and very cheerful. The green plains reveal their real attraction. Peacocks dance in the jungle. To see a dancing peacock is an awesome experience. During the rainy season, everyone just gets spellbound.

Welcome to TheNextSkill. This article will help you compose an essay on the rainy season in different word lengths like 100, 150, 200, 300, and 500 words. You can also read our Essay Writing Guide to improve your writing skills.

The Rainy Season or monsoon season approaches India about the mid of June and stays for a period of three to four months ending in September. This season is originally described by heavy constant rainfall and humid circumstances.

As it rains, dry ponds and puddles get filled with water again. Rivers flow at their full size. The sky seems full of clouds. The plants look more attractive in the rainy season. The peacocks start dancing in the jungles. The cold breeze touches the face and the shower of droplets of rain gives an amazing feeling.

The rainy season is important in various aspects. First, It is necessary for agricultural purposes. Secondly, It is vital to maintain the groundwater levels balanced. Thirdly, this season balances the ecological system in the environment. And last but not the least, Rainfall is crucial to supply natural water to the living and non-living things on the planet.

Although the rainy season is a natural event that occurs due to the change of movement of wind that brings clouds and storms. When the day earth’s surface temperature increases all around, air raises and builds a low-pressure zone.

This forces the moisture-filled winds from oceans towards the planes (lands). And when this moisture and clouds arrive at the land they start raining. This cycle lasts for some time in the area and the season is named the rainy season.

In conclusion, the Rainy season is a natural event necessary for all living beings and non-living things as well. It is the most beautiful season of all the seasons. It is an important season to sustain life on our planet earth. In India, this season holds a special value for the farmers and the country.

The Rainy Season is the most awesome and attractive season of the year. It is the season when the sky is full of rainy clouds making the environment colourful. Along with the appearing clouds, the rainy season is portrayed by high humidity and heavy winds. This season lasts for about three to four months in India.

Furthermore, both tropical and non-tropical regions get rainfall according to their topographical location. From peacocks dancing in the rain to jumping in puddles, this season has it all. Scattering droplets of rain from the sky bring events of joy to everyone’s face. From a child to an aged man, this season is for all to relish.

The people of India refer to this season as “Monsoon”. This season makes everyone like the season itself. Everyone looks happy and calm. In India, the Rainy season typically starts in June and lasts for about three to four months ending in September. In various countries and various geographical regions, the duration of the rainy season is not fixed.

India is an agricultural country. Most people living in rural areas are completely dependent on agriculture to earn their living. The duration of the rainy season holds a prominent significance in farmers’ lives. They wait for this season with immense hope.

The Environment in the Rainy Season

Who is not familiar with the environment during the rainy season? The sunlight is hard to find and the cold breeze flows all around. The sky is full of blackish water-filled clouds. The showers of rain on the face fill all of us with an outstanding experience of pleasure. Moreover, The atmosphere sounds calm like never in any other season.

The trees look washed and very bright. The green fields uncover their real beauty. Peacocks dance in the forest during this season. Seeing peacock dancing in the jungle is a unique experience. Nature reveals its true beauty in this season that makes everyone just spellbound.

The rainy season is vital to maintain groundwater levels and natural reserves. Besides, all the living organism on the planet requires pure natural water. To get natural and refined water, The rainy season is important. Moreover, Water is a part of nature and contributes to maintaining the ecological system on earth.

As discussed above and known fact that a large fraction of the population in India depends on agriculture for fulfilling their basic needs. Moreover, twenty per cent of GDP is contributed by agriculture in India. So, Ultimately the rainy season plays a crucial role in our country.

In the bottom line, The Rainy Season, the most joyful of all the seasons is like a combo of summers and winters. Peace like in summers and cold wind like in winters. A relaxing period to spend with your loved ones, enjoying the fragrance of showers while drinking hot tea is an awesome experience. Rain is important for all living organisms on earth whether big or small. Plus, It is needed for green regions to stay green in their true beauty.