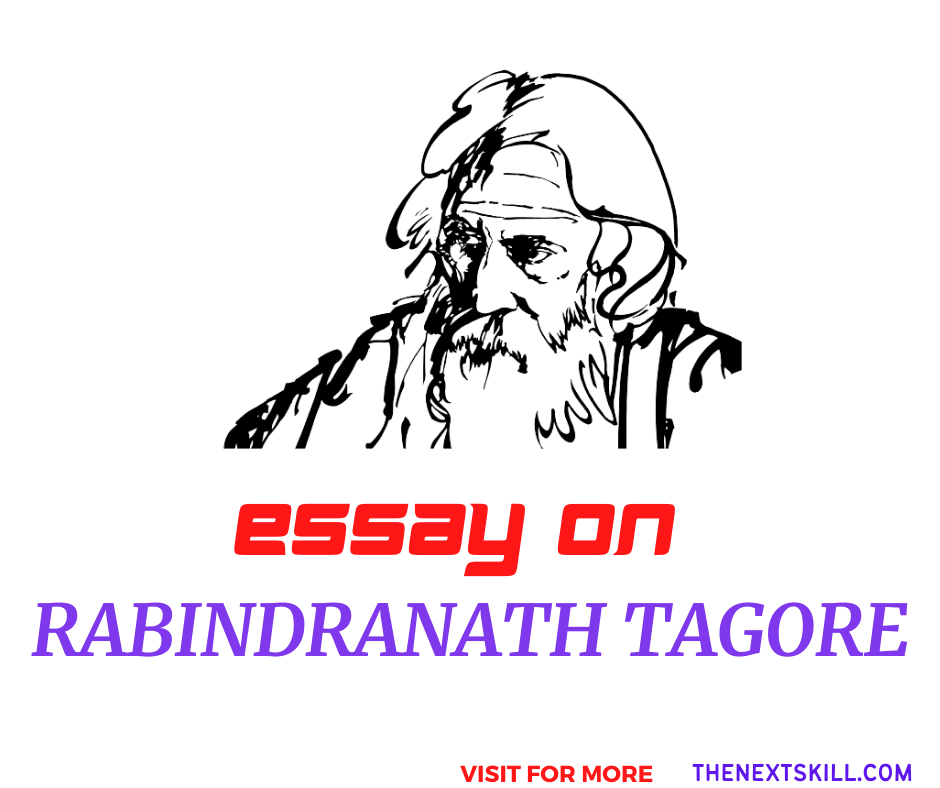 Essay on Rabindranath Tagore: The culture and civilization of any country are not shaped by the mere establishment of events, dates, principles and rules, but in reality, it is impacted and built by the works and teachings of amazing personalities.

Rabindranath Tagore who is also called “Gurudev” was one of the Indian sages who guided humanity. Not only he was a saint but he was an extraordinary personality blessed with multiple talents. He is still remembered as a world-famous writer, painter, journalist, teacher, philosopher, musician, philosopher, educationist.

Welcome to Thenextskill.com. This page will provide you with an essay on Rabindranath Tagore. The text can help you compose paragraphs, speeches, articles on this multitalented personality. You can skim the text to compose a long or short composition. Students of classes 6, 7, 8, 9, 10, 11 & 12 can use it for their assignments.

Gurudev Rabindranath Tagore was a master of many rare talents. He is still remembered as a world-famous writer, painter, sculptor, journalist, social reformist, teacher, philosopher, musician, educationist. Whatever he did was for the upliftment of humanity and the nation. His description in words will always be insufficient.

Gurudev took birth on the 7th of May in 1861 at Calcutta. His father Debendranath Tagore was a religious reformer and a Hindu philosopher. His mother Sarada Devi was a housewife. Rabindranath Tagore always wanted to become a barrister. He enrolled in Bridgeton Public School in 1878 To fulfil this desire.

He studied law at London College University. But in 1880 he came back without getting a degree. Rabindranath Tagore had a passion for writing poetry and stories since childhood. He started writing dramas and poems at the mere age of sixteen.

Most of the education of Rabindranathji took place at home. Different teachers were appointed for the education of Sanskrit, Bengali, English, painting and music to Rabindra Nath at home. He received schooling from 1868 to 1874.

After 1874, his schooling was stopped. At the age of 17, he was sent to England along with his brother to study law. There he studied English for some time at University College London from a teacher named Henry Malle. He lived there for a year.

The family members of Rabindra Nath were well educated and art lovers. After the death of his mother, he was not interested in sports. He used to sit alone and think, did not speak his words to anyone and tried to write his words in the form of poetry.

As we know he started writing at the age of sixteen. He wrote various genres. He wrote the original dramatic piece Valmiki Pratibha. In 1890 he wrote another drama work Visarjan. Visarjan is probably the best drama work of Rabindranath Tagore.

Rabindranath Tagore was not only an artist but he was also a true patriot. He was active in politics. He wrote many songs for the motivation of Indians. He also wrote a number of patriotic songs. he was in opposition to British rule.

Most noteworthy, he wrote the Indian National anthem “Jana Gana Mana” so beautifully portraying the features of the country throughout his composition. This composition tells us how intelligent was he.

In conclusion, Rabindranath Tagore had influenced the nation and the youth as well. He was a multitalented man. He lived a simple life but taught us the value of thinking high and working for the country. His contributions can never be compared to someone else’s.