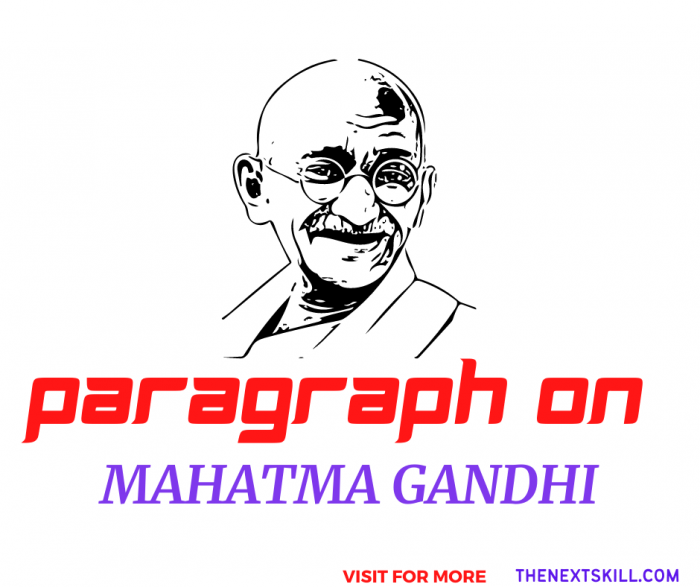 Paragraph on Mahatma Gandhi-Mahatma Gandhi, also known as “Bapu” and “the father of the nation“, is a name counted as one of the Greatest Indian figures and freedom fighters. He always fought against the evil spread in society. Indians recognise him very well for his extraordinary accomplishments.

On the celebration of Gandhi Jayanti, there are various writing competitions carried out in schools and colleges. Students have to share their own unique views on Mahatma Gandhi. This contest actually is conducted to remember the sacrifices of Gandhi Ji (Baapu).

Welcome to Thenextskill.com. This page will help you compose short and long paragraphs on one and only Mahatma Gandhi. Here below are given some paragraphs in different word lengths such as 100, 150, 200 and 250 Words. If you find this post helpful, share it with your friends.

Know some Facts about Mahatma Gandhi

Before you start writing about Mahatma Gandhi, you must know some of the important points about him or if you already know then recall them given below:

Mohandas Karamchand Gandhi is a name in the golden texture of Indian history. He was an outstanding Indian patriot. His whole life contributed to serving his nation. Indians got freedom from British rule because of their enormous efforts. He was an appreciable philanthropist with an effective personality.

Undoubtedly, Each Indian knows about him if not, we can conclude that person not to be an Indian. He lived a hard life that we can’t even imagine living. He was also a great leader. If he were alive, I would be his follower but unfortunately, we can only follow their teachings now.

Mohandas Karamchand Gandhi is a great and unforgettable personality in Indian history. He is also known as Bapu and the father of the nation. His name is one of the Indian freedom fighters and true patriots. Professionally, he was a lawyer but dropped his practice as a lawyer due to a lack of interest. He served his country throughout his life to raise the country’s sovereignty.

Mahatma Gandhi always fought against the evil spread in society. He always ran on the path of non-violence. Even if Mahatma Gandhi did not like politics, his name is counted as one of his most renowned political figures. This is because he had to descend into politics for public welfare.

In 1914, the Sanskrit word “Mahatma” was applied before his name making it Mahatma Gandhi which is now used globally. He was shot dead by Nathuram Godse on 30 Jan 1948. He will always be alive in our hearts.

Mahatma Gandhi was an Indian freedom fighter. He helped our country to get freedom from English Rule. His full name was Mohandas Karamchand Gandhi. Mahatma Gandhi took care of his country as a father and hence he is known as the father of the nation and Bapu.

Gandhi JI was born in a Hindu family on 02 October 1869 at Porbandar in Gujrat. His father Karamchand Uttamchand Gandhi was diwan of Porbandar state. The name of his mother was Putlibai. When he was 8 years old, Mahatma Gandhi was admitted to a local school in Rajkot where he studied arithmetic, history, geography, and the Gujarati language. After two years he entered High school in Rajkot.

Mahatma Gandhi was shy in nature in his childhood. He was an average school student. His only friends were books. He was not interested in games. he was a vegetarian person and very conscious about their health. He also avoided eggs and milk. He used to do experiments with his diet. In his experiences, he found that “one man’s food may be poison for another”.

Even if Mahatma Gandhi did not like politics, his name is counted as one of his most renowned political figures. This is because he had to descend into politics for public welfare. Most noteworthy, despite a lot of hardships, he did never lose his self-confidence.

Hope you liked the post-Paragraph on Mahatma Gandhi. If so, Don’t forget to share it with your friends and loved ones. Thank you so much for using this website. If you have any suggestions regarding the content published on this page. Don’t bother to let me know in the comments.