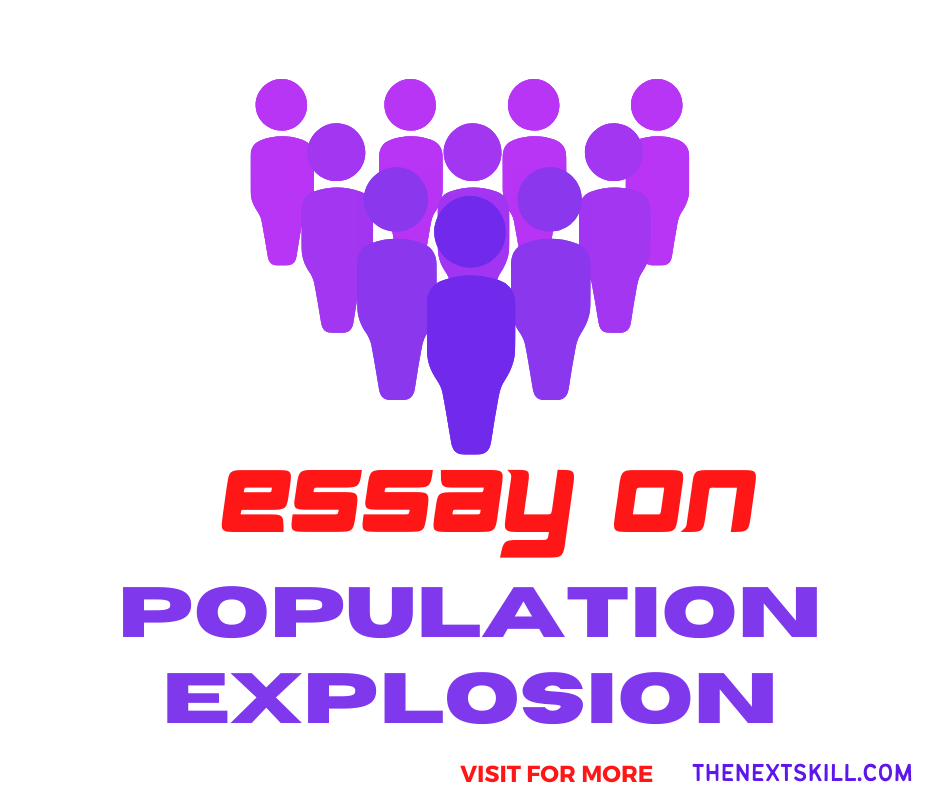 Essay on Population Explosion: Population explosion refers to the rapid increase in the population of an area. For a developing country, it is a great problem to deal with this problem and meet the demands of the population at a given time.

For any country, its population can be an asset but when the population increases beyond the normal speed, it creates a problematic situation that causes the country to face various challenges such as unemployment, poverty, child labour, exploitation of labour, bribe culture etc.

Welcome to Thenextskill.com. This page will help you compose an essay on population explosion. This post is created for kids, children and students who are studying in classes 6, 7, 8, 9, 10, 11 & 12. Unlike this post, you can explore more topics for essay writing on this website. So, Keep Visiting ❤.

✔ How To Save Water Essay

The term “Population Explosion” refers to the sudden increase in the population of a country. This is the reason behind the increased world population. If it continues for some more years, we will suffer a number of problems such as scarcity of food, scarcity of land, exploitation of natural resources etc.

Furthermore, unemployment will reach its peak and we will see widespread poverty. It has been seen that developing countries are more likely to face a population explosion. Illiteracy, high rate of childbirth, and decreased death rate are primary reasons for population explosion.

INTRODUCTION: Population Explosion means a sudden growth over a short span of time in the population of a specific area. When there is a population explosion, there are seen severe concerns such as meeting the daily needs of the population, providing employment, maintaining internal peace, & preventing social injustices etc.

Illiterate people do not understand the significance of family planning and hence bear many children. Women’s education is another big cause contributing to the population explosion. They do not have proper knowledge of birth control methods

The third cause is life expectancy growth. Nowadays people live longer compared to earlier times just because of a better lifestyle and medical services. The fourth cause is somewhat related to the third one, it is the decrease in child mortality rate because of better medical facilities.

IMPACTS: In this modern era, population explosion in any country can be proved a burden. Because more people will consume more and government needs to import more and export less. This might lead to economic decline.

CONCLUSION: Anything in excess is problematic and so is population explosion. For any country, it creates a problematic situation that causes the country to face various challenges such as unemployment, poverty, child labour, exploitation of labour, bribe culture etc. For sustainable development, all the countries need to control population explosion using various techniques.

Population explosion refers to the rapid increase in the population of an area. For a developing country, it is a great problem to deal with this problem and meet the demands of the population at a given time. Despite being a concerned issue, it is not addressed by the government of these countries.

Population explosion leads to many other problems in a country such as meeting the daily needs of the population, providing employment, preventing social injustices and maintaining internal peace etc. If countries do not find a resolution soon, the earth will have to face severe consequences in the near future.

Illiteracy is one of the primary reasons for population growth in a country. Illiterate people do not understand the importance of family planning and thus bear many children.

Child marriage is the second major reason in the developing countries that greatly contributes in the rapid population growth. Lack of sex education and childbirth prevention methods leads to more number of children.

In society, men and women both hold equal importance but it is seen that women’s education is still an issue in developing countries. Uneducated women have no choice than being dependent on others and hence they are married as soon as possible.

This is the most disgusting reason, at least I find. The poor mentality of people leads to a population explosion. They think more children means more wealth arriving at home. Another kind of people thinks children are god’s gift so conceive as many children as possible.

A Decrease in Infant Mortality Rate

Due to better medical services and facilities, we are able to minimize this rate and now only a few cases of death are known per thousand death.

Due to the betterment of lifestyle, we have increased the life expectancy of people. This is a reason behind huge population at a given time.

With the growth of the population, the demand for jobs and employment also increases. but to meet the supply of employment for a huge population is not easy. Hence, Unemployment is one of the greatest outcome of population explosion.

Due to lack of employment, people do not meet their daily needs and live their lives below the general standards of life. This is called a state of poverty.

Having a huge population, a country face a huge demand of resources. To meet this demand, there are chances to import more and export less. This alone can be a reason for economic decline for a country.

HOW TO DEAL WITH POPULATION EXPLOSION

There are many ways by which we can control a population explosion. The government can take steps to aware of the people about the various ways that can help in controlling the population. Also, it should execute some strong campaigns for family planning and birth control.

To conclude, population explosion impacts society, the economy, human life and the world. In a country, it produces a problematic situation that drives various challenges for a country such as unemployment, poverty, child labour, exploitation of labour, bribe culture etc. If it is controlled, many other problems will come to an end automatically.

Population explosion refers to the rapid increase in the population of an area in a short period of time.

How does population explosion impacts a country?

Population explosion impacts a country in many ways. It leads to an increase in unemployment, poverty, exploitation of natural resources, child labour, child abuse, crimes etc.