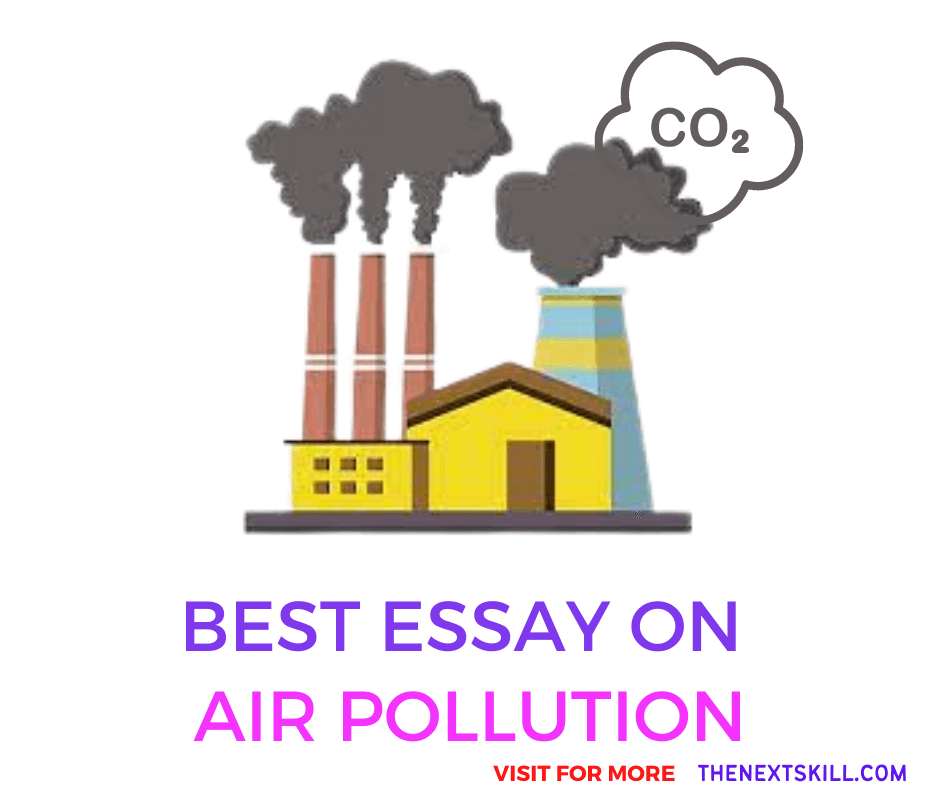 Essay On Air Pollution- “Air” the smaller the word, the greater its importance. It is the basis of the life of living organisms on the planet. But with the increase in air pollution, the air is also becoming harmful to us.

Air is the first fundamental requirement for the execution of life on earth. It provides oxygen to humans and carbon dioxide to trees. Unfortunately, this air is getting polluted and unfit for living organisms.

Welcome to TheNextSkill. This page will help you compose an engaging essay on air pollution in 100, 150, 200, 300, and 500 Words. Also, look at stats and facts about air pollution. You can also read our Essay Writing Guide here in order to increase the level of your writing skills.

When our air gets contaminated by pollutants, the process is called Air pollution. If we talk about the word “air” the smaller the word, the greater its importance. It is the basis of the life of living organisms on the planet. It helps us all living healthy life. But with the increase in air pollution, the air is also becoming harmful to us.

The major pollutants are smoke and gases from industries and various types of oxides. Carbon dioxide, smoke produced by transportation and firecrackers, burning solid materials, and radioactive particles. It is also dangerous to individuals and living beings on the globe.

There are a number of causes that enhance air pollution. Some are natural that are not in control like volcanic eruptions, forest fires, fossil fuel emissions, environmental dust etc. Others are man-made which are controllable like excessive use of fuel-based vehicles, wood burning, fuel burning and smoke released from factories.

The burning of wood and coal generates several hazardous gases that mix into our atmosphere making it contaminated for living beings. The main substances that cause air pollution are carbon dioxide, ammonia, sulfur dioxide, particulate matter, smoke produced by industries and firecrackers, the burning of solid materials, and a few others.

We can control this issue in a limited way because some of the leading reasons for Air pollution are natural. But, for the reasons produced by humans, we can take some measures to defeat it.

There are remarkable resolutions for the reduction of air pollution. Humans must walk to cover short distances and use the cycle as much as possible, We should plant more and more trees so that they can turn carbon dioxide into oxygen.

Air Pollution is an issue that requires to be resolved as soon as possible so that we can assume a healthy life on the planet. It is very crucial to care for our air because we all living beings depend on it. People should do their part to curb this problem. And the government should also take some bold steps to rectify the situation.

Main Headings of This Essay on Air Pollution

Air is the very base of the life cycle on earth. Almost all the organisms on our planet need air for different purposes. For example, humans and animals need air to breathe oxygen and for plants, it is a requirement to prepare food.

But, due to expanding industrialization and the collection of poisonous gases in the environment, the air is becoming more and more toxic day by day. Apart from that, these poisonous gases are the reason for a number of respiratory problems and diseases.

Air pollution is a threat to humans and other living beings because it stimulates the ratio of basic gases in the environment, turning the ecosystem less useful.

We burn wood and fossil fuel for different purposes that release oxides of carbon that when mixed in the air, get polluted. Air pollution is a result of many causes altogether including Carbon dioxide, sulphur dioxide, burning of fossil fuel and firewood, volcanic eruptions, smoke released from factories, forest fires, bombardment, asteroids, CFCs (Chlorofluorocarbons), and many more the main causes.

Besides, there are some other causes that pollute the air like industrial garbage, agricultural decay, thermal nuclear plants, power plants, environmental dust etc. There are some causes for which we humans are responsible and we should fine-tune them.

Air pollution has several negative effects on our health. It is a source of many respiratory disorders and also a cause of heart problems. When we inhale polluted air, It damages the cells of our respiratory system and we start facing various serious conditions.

Air pollution influences our lives in diverse ways. It affects human lives straightly and indirectly. It is a grieving problem for the earth as it is harming the ozone layer. It is a source of many diseases like asthma, heart diseases, lung-related problems, respiratory problems, etc.

Some solutions are always there for every problem. Similarly, we have various opportunities to overcome air pollution. But as we know we can fix the problem to a limit because some of the causes of air pollution are natural and we do not control over. Here are some resolutions below:

✔ Policy for industries– Industries release poisonous gases in the environment at a high amount. There is a need for proper policies for them. Also, we need to use reusable and recyclable products to reduce the operation of these industries.

✔ Reforestation– We are cutting trees on a large scale, so it is our duty to plant more trees to balance. It will help us reduce the harmfulness of the air.

To sum it up, Air is a part of our environment and our lives. It is the very first requirement for people to live a life but living a life is not enough. We need pure air to live a healthy life and we are aware of the present scenario. So, ultimately we need to protect it from being polluted if we want to expect a healthy lifestyle for future generations.

Stats and Facts about Air Pollution