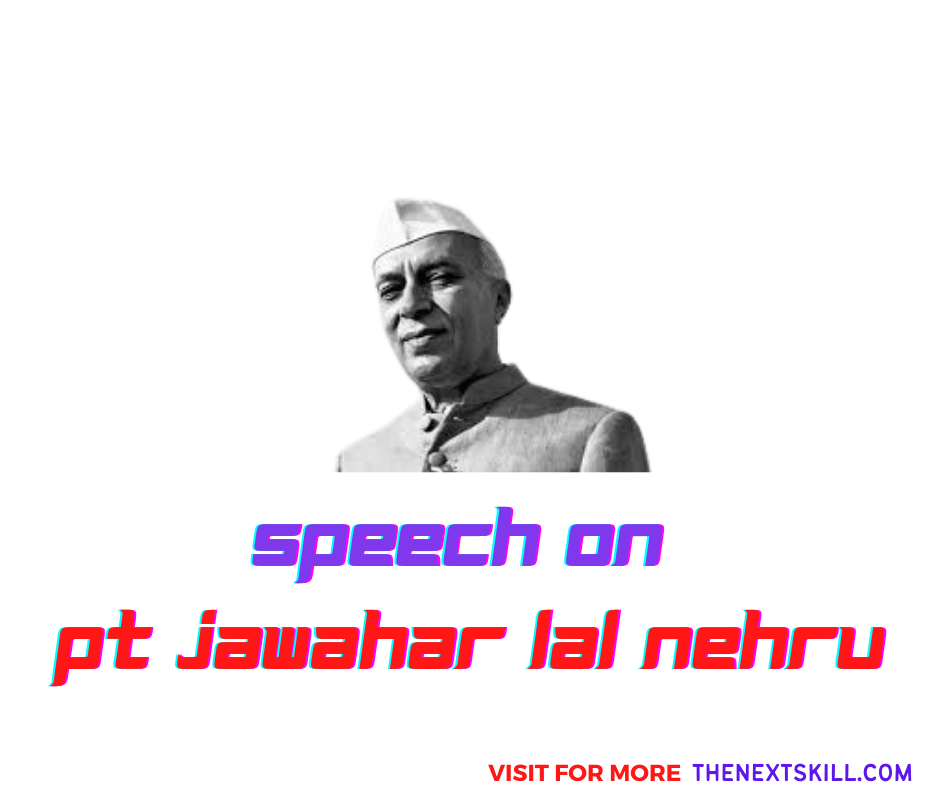 Speech On Jawahar Lal Nehru: There are millions of people who take birth on the earth every year but only a few of them remain immortal. This is because of their extraordinary deeds. Pt. Jawahar Lal Nehru is also counted as one of those personalities.

In India, Everyone knows about this great personality for different reasons. Some know him for his great love for children. Others know him as the first prime minister of independent India. Pt Jawahar Lal Nehru is also called Chacha Nehru.

Welcome to Thenextskill.com. This page will help you compose a speech on Pandit Jawahar Lal Nehru in different time durations like 1, 2, and 4 minutes. You can also read a wide range of essays and speeches on different topics to develop a deep hand at the English Language.

Today, with great pride and honour, I stand before you to speak a few words about Pt. Jawahar Lal Nehru. I am very blessed to have this valuable opportunity.

I want you all to guess a day that every child in India eagerly waits for. Of course, it is the 14th of November which is celebrated as children’s day. Primarily, this day is the birth anniversary of the great Indian freedom fighter Pt. Jawahar Lal Nehru.

He is fondly referred to as ‘Chacha Nehru’. It is just because of his special affection for children. Today we live in free India which is a result of the intense efforts of Indian freedom fighters among whom Jawahar Lal Nehru holds a special place.

You all should know that, during India’s freedom struggle, Jawaharlal Nehru was imprisoned 9 times by the British. Nehru was in jail for a total of 3259 days which adds up to 9 years. Thank You!

Do you know Chach Nehru delivered a famous speech: Tryst with Destiny Speech?

Firstly, I wish you all the best wishes for the day. Today, I am here to speak a few words about a great personality Pt. Jawahar Lal Nehru fought till his last breath to get us free. I feel myself to be the very fate for having this valuable chance.

The Architect of Modern India, Pandit Jawahar Lal Nehru born was born in Allahabad (now Prayagraj) on 14th November 1889 in the family of Pandit Motilal Nehru and Swaroop Rani. He is counted on the list of freedom fighters of India. He helped India gain freedom from English rule and also served the country after freedom.

You all should know that, during India’s freedom struggle, Jawaharlal Nehru was imprisoned 9 times by the British. Nehru was in jail for a total of 3259 days which adds up to 9 years. In 1935, when he was in jail, he wrote his autobiography “Toward Freedom” which was published in the year 1936 in the USA. Everyone should read that book once in life.

Furthermore, he is famous for his great love for kids and children. That is why the date of his birth anniversary 14th November is also celebrated as Children’s Day in India. Children’s Day is celebrated to increase awareness of the rights and education of children.

To sum it up, He has no match at all. He was a man of action who never lost hope despite innumerable hurdles. His burning desire to set India free fetches us a free India. We can never repay him.

This is what I wanted to say about this great personality. Thank you!

Greetings to everyone present here.

I am here to speak a few words on a great Indian personality Pandit Jawahar Lal Nehru. Before beginning my speech I want to thank you all for having me this excellent opportunity.

Undoubtedly, Pandit Jawahar Lal Nehru is a well-known personality among Indians. This is one of the names in the golden texture in Indian history. He owns various identities Children know him as Chacha Nehru. Indians know him as the first prime minister of Independent India.

He was born in Allahabad (now Prayagraj) on 14th November 1889 in the family of Pandit Motilal Nehru and Swaroop Rani. He was born great and also delivered greatness to his country. Through his exceptional vision, sincerity, and patriotism, he helped India to gain freedom.

Among all the other freedom fighters Jawahar Lal Nehru holds a special place. He always had a burning desire to set India free and he did not lose hope until achieving it. He faced various hurdles in this journey. He never wasted even a single moment enjoying life. His only goal was the freedom of India.

He was sent to prison multiple times. The total number of days he spent in jail adds up to 9 years of his life. Such a brave leader he was! He visioned taking India to higher levels in every area and he did a lot to do so. That is the reason he is also called “The Architect of Modern India“.

Mahatma Gandhi was an inspiration for him. So just like Mahatma Gandhi, he also followed the path of Ahimsa (non-violence). He became the first prime minister of Independent India. He died on 27 May 1964 due to a cardiac arrest. Around 1.5 million people gathered to watch his cremation.

What should we learn from him?

Chacha Nehru possessed many inspiring qualities. First of all, His futuristic vision was unique and he was a man of modern thinking. He always envisioned making India a modern and well-civilized country. Secondly, the quality of efficient use of time motivates us to understand the importance of Time. Aaram Haram hai (The rest is not allowed) was a slogan given by him.

Third, he used to devote himself to his goals until the desired result is achieved. This quality inspires us to stick to our goal until we get success. He taught us to fight for our rights. Most noteworthy, He believed that living for others is the real meaning of life for a human being.

To sum it up, it is said that everyone is unique. That is true but Pt. Jawahar Lal Nehru was an extraordinary personality. He has no match. No one can put himself in his shoes. He lived a hard life and devoted it to his nation. Hats off to him a million times. He will always be remembered and loved by all.

There is much more to say that this speech can endure till evening, but I stop my speech here. Thank you all for listening to my words, I hope you liked the speech.