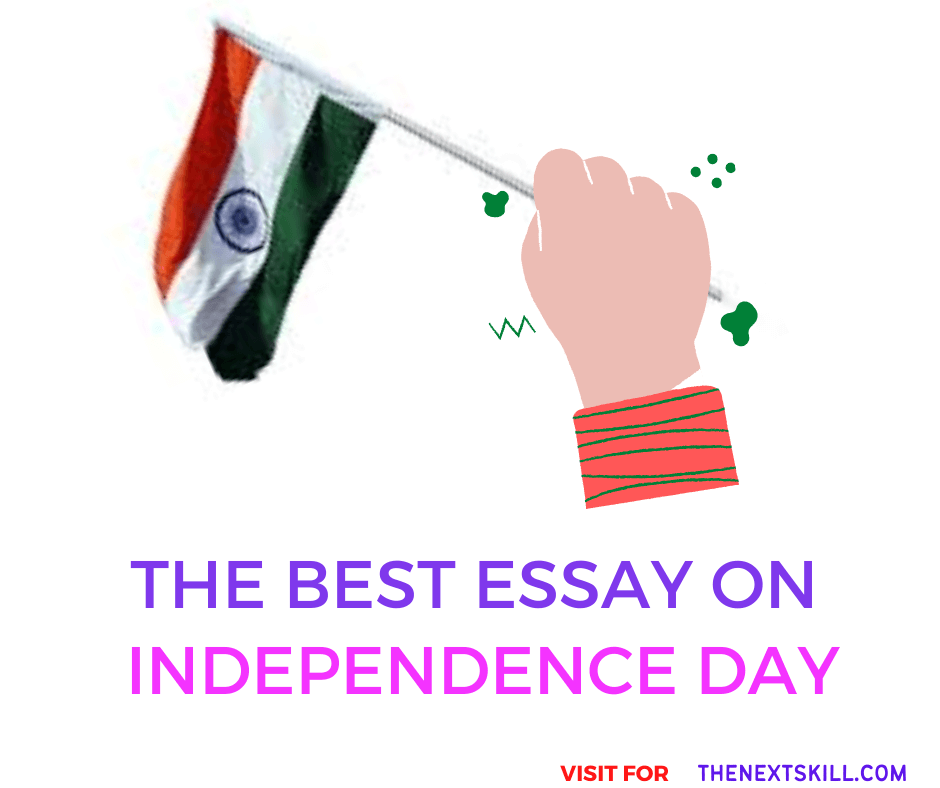 One of the reasons for celebrating this event is to honour our freedom fighters and their struggles. Also, we celebrate our priceless freedom. Mahatma Gandhi made enormous efforts to make this happen. Apart from him, there are many personalities to recall.

Welcome to TheNextSkill.com. This page will assist you to draft an essay on independence day in different word lengths like 100, 150, 200, 300, 500 words. You can read our Essay Writing Guide to improve your writing skills.

A Few Lines on Independence Day

India observes Independence day on 15th August every year as our country acquired freedom on this day in the year 1947. We celebrate our freedom on this day and show our respect towards our country “INDIA”. Also, we appreciate the struggles and sacrifices of our great freedom fighters. People from all religions in India glorify it with lots of joy and this is a sign of unity for our country.

All the people in India decorate their houses with national flags. Not only houses but government buildings also look beautiful after a theme of the Indian flag is applied to them. Schools conduct different types of functions and celebrations and distribute sweets among students. We hoist our national flag on Independence day and salute it and also we sing the national anthem.

Today we are free because of the struggles and contributions of our freedom fighters who fought for our country’s freedom. Mahatma Gandhi is one of those who served the country as a father and so he is called the father of the nation. Many times our freedom fighters were beaten and sent behind bars but they did not lose their confidence.

Apart from Gandhiji, Chandrashekhar Azad, Bhagat Singh, Sardar Vallabh Bhai Patel, Dr Rajendra Prsad, Lal Bahadur Shastri, Bal Gangadhar Tilak, Gopal Krishna Gokhale, and many others had to face the exploitation of Britishers. After a lot of struggles and difficulties, we got freedom from British rule.

At last, We celebrate Independence day with great excitement and enthusiasm. we can say that gaining freedom was not a bed of roses. Our freedom fighters struggled a lot to gain freedom. We should always respect them and remember their contributions. It is a great Indian festival as it is celebrated across India on a large scale. We should live together and love every countryman because Unity is our country’s Identity.

One of the most populous democracies in the world, “India” celebrates its Independence Day on the 15th of August on which our country became an independent nation. This day denotes the historic event when our nation eventually broke the shackles of domination and gained freedom from the British empire in the year 1947.

This indicates we are now free to govern ourselves and are not ruled by anyone else anymore. This day reminds us of our freedom fighters’ sacrifices that were made to set India independent from British rule. Independence day is a national holiday and this day is celebrated with flag hoisting, parades, and cultural events.

Our nation was controlled by the Britishers for several years. The East India Company governed India for nearly 100 years. Indians had always been ill-treated during British rule. Our nation had its rebellion against the foreign rule for the first time in 1857. The entire country combined and ran its first campaign against British power to gain freedom.

Many freedom fighters went through indescribable pain and lost their lives for the freedom of India. Then Britain started to weaken and India gradually headed towards its freedom. India’s freedom fight has always been an inspiration as it was the most non-violent battle in the world.

On this day, the national anthem is sung, and also flag-raising, ceremonies, and customs are carried at every edge of the country. Indians dress in a special way to honour their nation and culture. Kite flying is another practice that is observed on Independence Day in which people of all age groups participate. It expresses the freedom that we obtained on this day.

Our Prime Minister hoists our flag at the Red Fort. A parade with members of the army and police also participate. A speech to the nation is addressed by the PM where he utters on the country’s achievements in all these years. He even speaks about the aims for the future.

It is a very meaningful day to spark patriotism among youth and awake a sense of unity as the future of any country depends upon its forthcoming generation. Independence day also makes us remember of struggles and sacrifices of our great freedom fighters.

It is also celebrated so that our people can be inspired by understanding the history of India. To awake a sense of service for the country among our teenagers and also all the residents of India, Independence day is an essential day.

Summing up, it is a day when we tell the world how we got freedom from the grips of Britishers. It is celebrated to make our new generation aware of the struggles of our freedom fighters. This day is a recall of how freedom has changed India. When the people of India recall the history of India, inspiration is awakened in their hearts to serve the country.

If you want to give your essay on Independence day a special look, add some facts about Indian achievements.