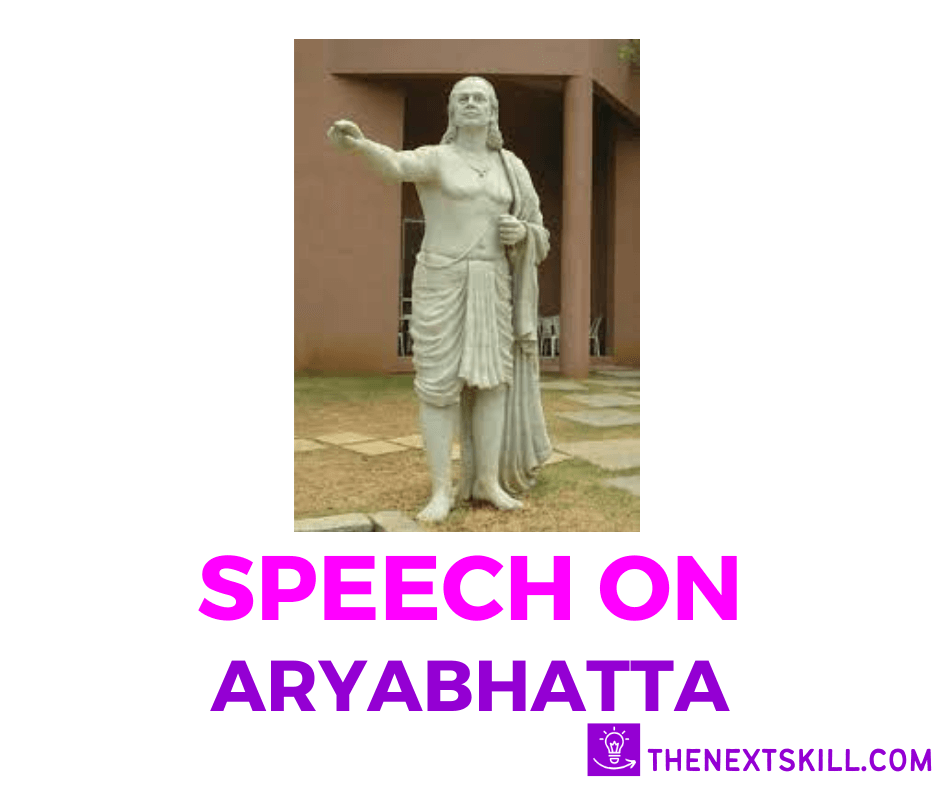 Aryabhatta is one of the great figures of history. He was a great scientist, mathematician, and astronomer. In this article, we will compose an example of a speech on Aryabhatta. This speech is written for students and children. Welcome To TheNextSkill.com. Let’s start.

Good morning all, I wish you all the best wishes and greetings & I also would like to thank you all for having me here to say a few words about Aryabhatta.

The man who invented “zero”, Aryabhatta is a famous personality around the globe. He was a great mathematician and astronomer. He is one of the greatest minds born in the holy land of India. His contributions to maths have solved a lot of puzzles about the universe.

The maths taught in Indian schools include Algebra, Quadratic Equations, Trigonometry, Arithmetic, fractions, the sum of series etc. All these topics are given by Aryabhatta. This is why he is also called the father of Indian Mathematics.

Moreover, Aryabhatta performed various calculations related to celestial bodies such as planets, moons and the sun. The rotation and revolution duration of the earth calculated by him is almost accurate. Not this, he also studied eclipses.

To sum it up, we can not describe his personality in words. All his works are commendable. Indians are fortunate enough to have a personality like his. Thank you!

Speech On Aryabhatta | 2 to 3 minutes

Reputable Principal, respected teachers and my dear friends! First of all, I would like to welcome all of you and also thank you all for having me a chance to deliver a speech on a great personality- “Aryabhatta”.

People use the phrase “one in millions” to appraise one’s personality. This phrase is best suitable to describe the personality of Aryabhatta. He is identified as the father of Indian Mathematics. Not only he was a great mathematician but he also was a good astronomer, a scientist and a genius scholar.

Today, I am here to present with you some facts about Aryabhatta that you might not be aware of. First of all, he was born in Bihar in 476 CE and studied at the world’s first university Nalanda. You might be surprised to know that he did all the calculations in the form of verses (Text poetry).

The mathematics we learn today in schools was given by him about 1600 years before. His works include Arithmetic, Algebra, Plane Trigonometry, Spherical Trigonometry, Fractions, Quadratic equations, the sum of power series etc. Some of his works are destroyed or lost due to preservation issues.

Aryabhatta calculated the value of Pie (π) up to the five decimals. Most importantly, he invented the Zero and the decimal system which revolutionised technological developments. Today, the height science and technology have achieved is the result of the invention of zero and decimal systems.

All the digital devices we use today use a binary system which involves 0 and 1. It means without the invention of 0, we can not imagine the invention of computers, supercomputers and other computational devices.

It might seem a very tiny achievement but scientists of contemporary times are able to unravel many secrets about the universe by making calculations. Hence, Aryabhatta holds great significance in the field of science and technology.

As you know that Aryabhatta was also a great astronomer. He calculated much about the spatial events and celestial bodies. He calculated the time of one revolution of the earth around the sun. It is surprising to know that those calculations match the present ones.

To sum it up, it is always less to say about the greatness of Aryabhatta. It was a fortune for Indians to have a personality like his.

Thank you for listening to my speech attentively.