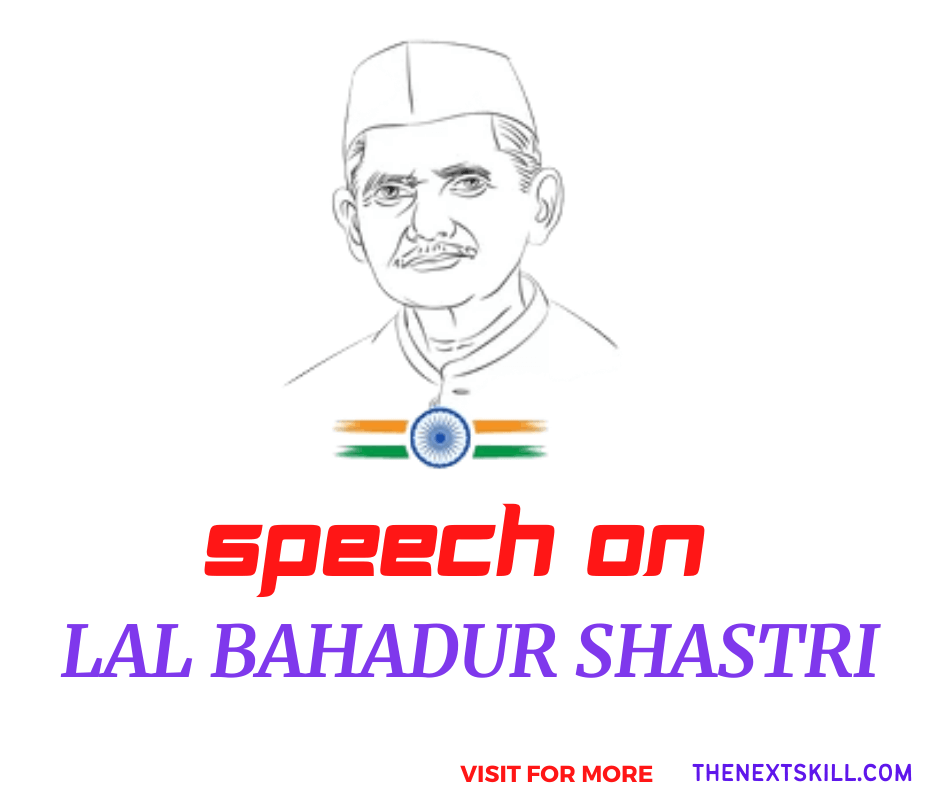 Speech on Lal Bahadur Shastri: Lal Bahadur Shastri holds a heavyweight in the lives of Indians. He has proven that your financial conditions can never prevent you from achieving extraordinary goals. He was born in a very poor family and served the country as a prime minister.

This was possible just because of his competence and devotion to the country. Being born poor, he understood well the problems of the people of India and he addressed those problems in every possible manner. He was the one who proposed the Green Revolution so as to eradicate hunger and poverty from the country.

Welcome, everyone. Today, I am here to say a few words about Mr Lal Bahadur Shastri- The second Prime Minister of Independent India. Before starting my speech, I want to thank you all for having me this valuable opportunity.

“Jai Jawan, Jai Kisan”. This slogan was composed and shouted by him. This slogan of four words explains to us his mindset and the vision he had for his country. In fact, during his tenure as Prime Minister, he empowered his army and farmers.

Apart from this, he worked for the people of India to eradicate the problem of poverty and hunger. He introduced the concept of the Green Revolution which aimed to introduce high-yielding varieties of cereals to alleviate poverty and malnutrition. He is known as the man of peace because he was very influenced by Mahatma Gandhi.

There is a lot to say but I want to stop here. Thank you!

Good morning and welcome everyone. I want to wish you the best for the day. Today, I am here today to present a speech on a very special Indian personality- Mr Lal Bahadur Shastri who served the country as the second prime minister.

Mother India is fortunate enough to have a number of great patriots who devoted their lives for the upliftment of the country and its countrymen. Lal Bahadur Shastri who is famously known as the man of peace is one of those patriots.

Shastriji was born on 2nd October 1904 in a very poor family in Mughalsarai, Uttar Pradesh. His father Shri Sharda Prasad was a teacher. When Shastriji was only one year old, his father passed away.  At the very young age of 17, on Gandhiji’s appeal to boycott schools and colleges, he left his studies and joined the non-cooperation movement. As a result, he was sent to jail.

During his tenure as a prime minister, he strove for the betterment of conditions of poor farmers. He then proposed the concept of the White revolution and the green revolution. These initiatives helped a lot in balancing the financial conditions of farmers. He also gave a very famous slogan “Jai Jawan, Jai Kisan”.

This is what I wanted to say about Lal Bahadur Shastri, I hope you liked my words. Thank you!

Welcome, all of you who are present here.

First of all, I want to wish you all the best wishes for the day and also want to thank you for having me this great opportunity to share my thoughts on a very great personality- Lal Bahadur Shastri.

Lal Bahadur Shastri needs no introduction. Being an Indian, Some day or other, you might have listened about him. Shastri was one of the recognised leaders in India. Apart from India, he is respected all over the world. His famous slogan was “Jai Jawan Jai Kisan”.

His slogan of four words explains to us his mindset and the vision he had for his country. In fact, during his tenure as Prime Minister, he empowered his army and farmers. You might be thinking How? I will discuss this in the later part. Let me start from the beginning.

Shastriji was born on 2nd October 1904 in a very poor family in Mughalsarai, Uttar Pradesh. His father Shri Sharda Prasad was a teacher. When Shastriji was only one year old, his father passed away. His mother’s name was Ramdulari Devi.

He was brought up by his maternal grandmother. He had his early education in Varanasi. At the very young age of 17, he joined the non-cooperation movement. As a result, he was sent to jail. After his release from jail, he started his studies at Kashi Vidyapeeth.

He contributed intensively to the freedom revolution. After independence, he served the country as the second prime minister after the demise of Pt Jawahar Lal Nehru who was made the first prime minister of free India.

Observing the poor conditions of farmers. He decided to do something that could help farmers to improve their financial conditions. As we know a significant section of India’s population is largely dependent on agricultural produce and cattle milk production.

He then suggested the idea of the Green revolution and the White revolution. You might be shocked to know that the food shortage caused the estimated deaths of between 1.5 to 3 million people due to starvation. The Green Revolution was a long-term strategy to overcome the acute food shortage in the country.

Moreover, The White Revolution ultimately gave rise to ‘Operation Flood; a project by National Dairy Development Board, which became the world’s largest dairy development program. It transformed India into the world’s largest producer of milk from a milk deficient nation, surpassing the USA in 1998.

Another thing to discuss is The Indo-Pakistan War of 1965. When Pakistan started the aggression against India, Lal Bahadur Shastri made it very clear that India will not sit quietly. He provided the liberty to the Security Forces to retaliate.

Shastri Ji said, “Force will be met with force”. The India-Pakistan war ended on 23 September 1965 after the United Nations approved a resolution asking for a ceasefire. This way Lal Bahadur Shastri had given a broad meaning to his concise slogan “Jai Jawan Jai Kisan”(Hail soldier, hail farmer).

This is what I wanted you to know. Thank you so much for having your attention. I hope you liked my speech.