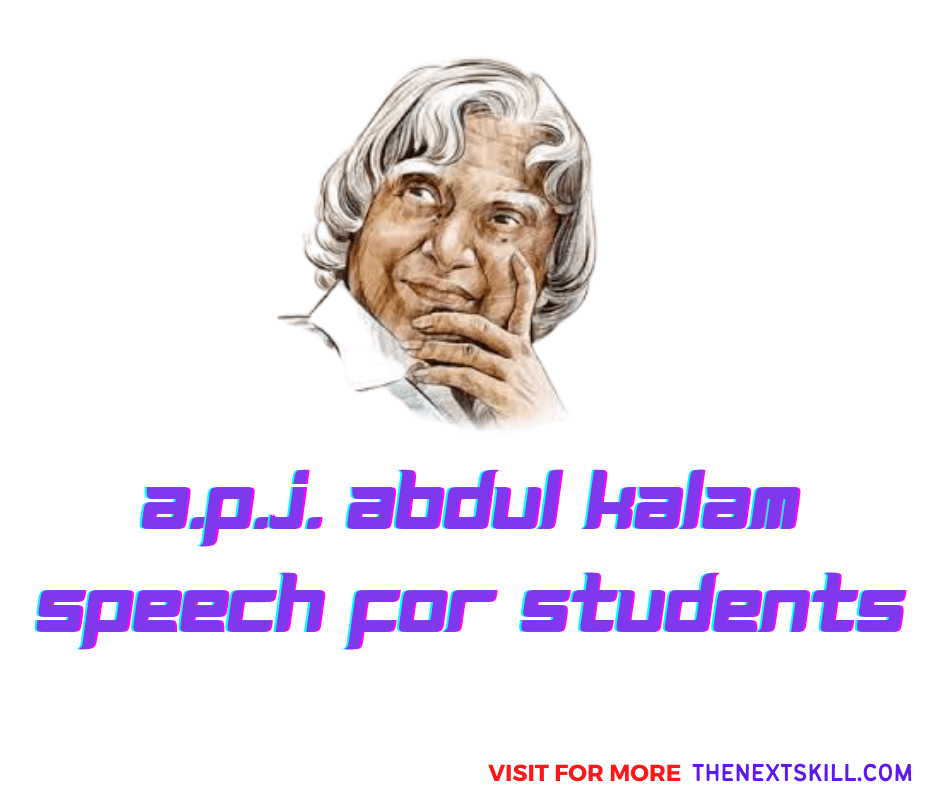 Speech On A.P.J. Abdul Kalam – A.P.J. Abdul Kalaam was a man of action. He had set an example that how can one touch the heights of the sky from the bottom. No one can replace him in terms of his greatness, wisdom and patriotism.

It is surely rare for the world to witness a leader that is sensible, wise, selfless and loved by all. Avul Pakir Jainulabdeen Abdul Kalam was one of this kind. In my own opinion. there are no words to describe his personality.

This page will help you compose a speech on A.P.J. Abdul Kalam in 1, 2 & 3 Minutes. But before you write a speech on him. Just listen to what he advised to students to achieve success. You can also read a long essay on Abdul kalam here.

Here below is the text form of a motivational speech given by great sir A.P.J. Abdul Kalam:

We should know, how to handle, not only how to handle success, how to handle the failures, particularly you are in the management environment. I want the young people to understand how to manage failures because any task you do, you have to come across problems. The problem should not become the captain of the individual or project chief.

The project chief should become the captain of the problems and defeat the problem and succeed. Learning gives creativity, Creativity leads to thinking, thinking provides knowledge, knowledge makes u great. History has proven that those who dared to imagine the impossible, are the ones who break all the human limitations in every field of human endeavour whether science, medicine, sports, arts or technology.

If you want to be discoverers if you want to be innovators. I am going to give you what type of character you must have. Inventions and discoveries have been illuminated from the creative mind that has been constantly working and imagine the outcome.

Someone Asked a Question: Sir! I would like to hear from you a few tips for the upcoming generation to succeed in life.

He replied: Well! Succeed in life I have already told you, you have to do four things okay! Great aim! I will have great aim! I will continuously acquire the knowledge I will do hard work! I will persevere and succeed Okay. That is the mantra.

Another Question Asked: “You have many accomplishments. You have written books you served as president you are an aerospace engineer, you have been a professor. But! you say the title the best is the title of teacher. why is it that?

He replied: You know I had a teacher, you might ever say, young boy. 10 years boy. The second world war was going on. At that time I use to see my class fifth class teacher in science teacher. He enters the classroom and we use to see the radiation knowledge from him when he enters classroom, my teacher, I see the radiation of purity of life!

And the way he taught, my dream got shaped. What should be my way of life he is the person that teaches and gave me the vision of my life. A teacher has got a fantastic opportunity to grow minds and to give the dreams to young people and mature the dream with them and they will become a great human being, sometimes they will become better than you, better than the teacher so that opportunity you have.

Most Reputable teachers and principle and loved friends. first of all, I want to wish you all the best wishes for the day. Also, I am very grateful for having a chance to deliver a speech on Dr A.P.J. Abdul Kalam.

Abdul Kalam is a name to which every Indian is well aware. “The missile man of India” needs no introduction. I feel very honourable to have a chance to speak on his greatness but the truth is that even hundreds of people like me can’t able to describe his greatness.

He set an example of how anyone can touch the highest limits to the sky from the lowest point on earth. It is a fortune for our nation to get such a fabulous personality like him. He is not only motivation but he is an inspiration for me & thousands of thousands of people residing in India. He given a success mantra to achieve success. It is:

Thank you all for listening to my words. I hope you liked it.

Known as the Missile Man of India, Dr APJ Abdul Kalam contributed not only to science but also served as the 11th President of India and was widely regarded as the ‘People’s President’. He has no match at all. None can replace him.

Hello, all the people present here. Before starting my speech on this great personality, I would like to wish you all the best wishes and also want to pay thanks for having me this valuable opportunity.

Dr A. P. J. Abdul Kalam, full name Dr Avul Pakija Jainulabdeen Abdul Kalam, Was an Indian scientist, A politician, A writer and A teacher. He took birth on 15 October 1931 at Rameswaram in Madras Presidency. He was an average student in school but his learning attitude was exceptional. He used to spend hours studying.

He always dreamed of flying in the sky. Actually, he wanted to be a pilot. Abdul kalam missed achieving his dream. He was the ninth qualifier for IAF (Indian Air force) and there were only eight positions available. But his this failure proved to be a success for the entire country.

Mr Kalam is the most loved President India ever had. During his scientific and legislative career, Abdul Kalam served the country tirelessly for the upliftment of Indian technology. He has been and always be an inspiration for the ordinary youth and citizens of India.

At last, I want to make you aware of the success mantra he gave to the students: That was:

There is a lot to say but time is a limited resource & we should respect time. Thank you again. I hope you liked my speech.

India is fortunate enough to have a great personality like Dr APJ Abdul Kalam. Everything that was done by him was only for the progress and upliftment in the field of technology. His contributions to India is incomparable. He served the country as a scientist and as a president. Most noteworthy, Abdul Kalam is the most loved president by Indians.

Before heading ahead to my speech on this great personality, I would like to wish you all the best wishes and also want to pay thanks for having me this valuable opportunity.

Abdul Kalam is a name to which every Indian is well aware. This personality needs no introduction. I feel very honourable to have a chance to speak on his greatness but the truth is that even hundreds of people like me can’t able to describe his greatness.

As an aerospace scientist, Kalam worked with India’s two major space research organisations-Defence Research and Development Organisation (DRDO) and the Indian Space Research Organisation (ISRO).
He usually spoke to children and the country’s youth to inspire them to think big in life.

There is an incalculable contribution of Dr APJ Abdul Kalam to the country. But his greatest contribution is the development of missiles Agni and Prithvi. Also, he was a member of the Pokhran nuclear test conducted in 1998.

In his lifetime, Abdul Kalam won not only the national awards but also bestowed many international awards. He was a fusion of simplicity and integrity. He was so involved at work that he rises early in the morning and work till late times after midnight.

He has also given a success mantra to achieve success in life. here it is:

Dr APJ Abdul Kalam penned several books during his lifetime, but his most renowned book was ‘India 2020’, which has an action plan to make India a superpower.

India’s great missile man took his last breath on 27th July 2015 while delivering a lecture to students in an institute at Shillong in Meghalaya. That was the day when India lost a great patriot in the form of Dr APJ Abdul Kalam.

Dr APJ Abdul Kalam, popularly known as the ‘Missile Man of India’, was a source of inspiration for tens and thousands of Indians. He set an example of how anyone can touch the highest limits to the sky from the lowest point on earth.

I stop my Speech here. Thank you again. I hope you liked my words.