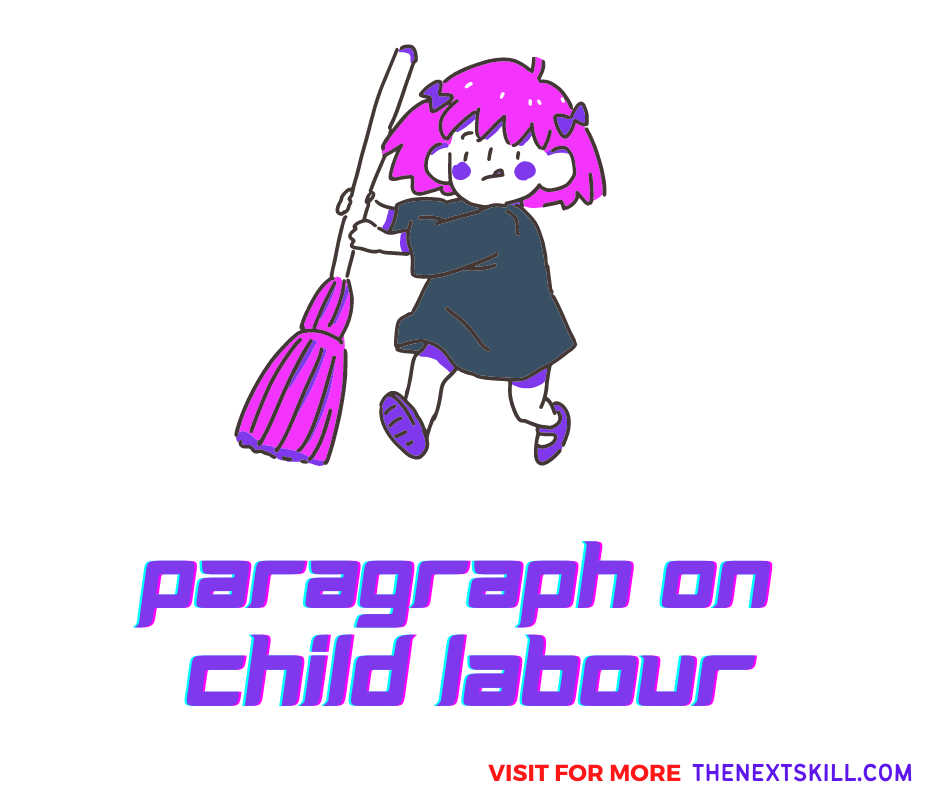 Paragraph On Child Labour & and its elimination- Child labour is the practice of children indulging in commercial labour work. This is evil for society and the country. This social evil deprives children of their rights and snatches their childhood. It is the need of the hour to eliminate this sin from humanity.

No Doubt, child labour is a cruel crime that deprives children of their childhood and hampers their physical and mental development. But a lot of companies employ children for the sake of cheap labour. According to law, employing a child in any kind of work is a criminal offence.

Welcome to TheNextSkill.com. This page will help you write an engaging and in-depth paragraph on Child Labour in 100, 150, and 250 Words. Go here If you need a longer Composition on Child labour. You can also read our Essay Writing Guide to improve your writing skills.

The term “child labour” itself is defined. When a child is forced to work as a labour, the incident is called child labour. It destroys the childhood of children and also their future is burned to ashes. Sometimes, Children have to do work to support their families because of the poor condition of their families.

Child labour is not only damaging the future of young ones but also of our nation because upcoming generations determine the progress of a country. We all need to take steps against this terrible practice so that our young generation can get their true rights.

“Child labour” is a term that everyone is well aware of. It simply refers to a crime where children have to work at very early ages. It seizes the childhood and dignity of children. It is something like burdening them with immense responsibilities of which they are not capable enough.

They have to do heavy labour work at a very early age when they are supposed to play with toys and study at school. It is a cause of underdevelopment of their physical and mental health. Poor or economically weak families in India push their children to work for money instead of educating them.

The global surveys show that 152 million children – 64 million girls and 88 million boys are in child labour globally, accounting for about one in ten of all children worldwide. Our country is also a contributor to this large number. This number needs to be cut down to zero to retrieve the true rights of children.

There are lots of sinful practices in every country accountable for their stuck growth and prosperity. One of those practices is “child labour”. The global surveys reveal that 152 million children – 64 million girls and 88 million boys are in child labour around the globe, accounting for about one in ten of all children worldwide.

The major cause that promotes child labour is poverty. Economically weak families have to put their children into this Dirty swamp so that they can satisfy their basic needs. Additionally, they are not able enough to afford education for their children. Also, employers employ children for the sake of cheap labour.

Child labour leaves a perilous impact on children involved in it. The first and foremost effect of child labour is children lose their childhood and basic rights to education. They are deprived of enjoying their innocence and naughtiness.

Children involved in child labour have to handle several difficulties during work time. They carry the load beyond their capacities and so they get fractures and physical injuries. In construction industries, they come across cuts, burns and wounds.

At last, Child labour is a curse for our children and it is needed to trash out of society as soon as possible. It is not only crushing the future of young ones but also our nation because future generations determine the advancement of a country. We all have to take measures against this terrible practice so that our adolescent generation can get their true rights.

Stats And Facts About Child Labour

Q. Why should child labour be eliminated and how?

Answer (from the book): (students must write answers based upon their understanding)
Child labour should be eliminated because it takes away from the child’s childhood and elementary education prospect. Moreover, since child labourers are cheap, and consequently engaged in hazardous employment, they are often vulnerable to mental and physical illness. To curb this problem, it is important to make education easily accessible.

Apart from that, parents must be made aware of the consequences of working in harmful environments. It is also important to make the public aware of the fact that child labour is a criminal offence and is punishable under the law. The government must ensure stricter child labour laws and that the offenders are punished.