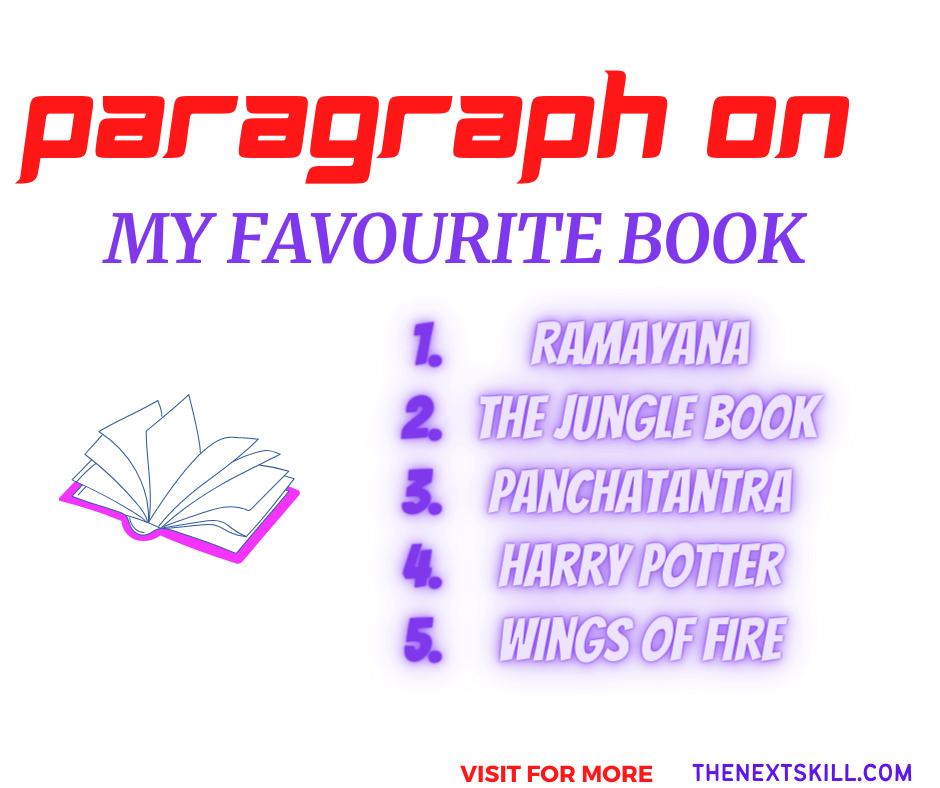 Paragraph On My Favourite Book: Books are called the deep ocean of information, knowledge and experiences. There are millions of books in the world. Some books provide us with information and knowledge while others offer us fantastic entertainment.

Information and Entertainment play a crucial role in human society. If we club these terms, derives Infotainment which means an act of entertainment with gaining some sort of information, learning and experiences. Books possess the ability to provide us with infotainment.

Welcome to Thenextskill.com. This page will provide you with some paragraphs on my favourite book. Indeed, there are five different paragraphs covering the books; Ramayana, The Jungle Book, Panchtantra, Harry Potter, and The Wings of Fire.

If you want to know how to write a 500+ words essay on my favourite book; give a look at this example.

Paragraph On My Favourite Book- Ramayana

I am very fond of reading books. I have read more than a hundred books so far. Of all, One book is very close to my heart. That is my favourite book Ramayana. Some of us refer to this book as a story while others believe that it is history. This book sings the glory of Lord Rama As its name suggests.

Ramayana, written by Rishi Valmiki, is the greatest Epic after Mahabharata. It is the religious book of Hindus. Reading this book will guide you on how to become a good son, brother, husband, leader, devotee etc. Each of the characters described in the book had a unique quality.

Ayodhya’s King Dasharatha had four sons namely Ram, Lakshman, Bharata, and Shatrughan. After completing their education, they all were married. Lord Ram had to go to exile for a period of 14 years with his wife. He went for his exile period with his wife Sita and brother Lakshman.

In the jungle, Sita was abducted by Demon King Ravana. Lord Ram defeated Ravana and rescued his wife back to Ayodhya. Then only Ram was conferred as King of Ayodhya. He was the ideal king for his people of the kingdom of Ayodhya. Be it a story or history, this book has influenced me from top to bottom.

Paragraph On My Favourite Book- The Jungle Book

My favourite book is “The Jungle Book” written by Rudyard Kipling. The story is about a human child Mowgli brought up in a dense jungle raised by a group of wolves. The story begins when Bagheera, the friendly panther discovers a brown baby boy and brings him to the group of wolves.

Mowgli is then raised by the Mother Wolf as her own cub. This is how this adventurous story of Mowgli begins in the jungle. Bagheera, the black panther becomes his best friend. Baloo, the big brown bear is also Mowgli’s friend and teacher. Mowgli learns all the ways of the jungle by his father wolf.

Sher Khan, the tiger was the terror of the jungle. Years later, Mowgli grew up to be a young boy full of energy and strength. He has numerous friends in the jungle with whom he enjoys and have fun. But he knew that one day Sher Khan will come to kill him.

One such day arrives when Baloo informs Mowgli that Sher Khan has planned to kill him. Then, Mowgli very intelligently plans to defeat Sher Khan with the help of the bulls. At last, Mowgli get success in defeating Sher Khan and everyone in the jungle was happy.

Paragraph On My Favourite Book- Panchtantra

Children love stories. You can listen to stories from your grandparents or read storybooks. My favourite book is Panchatantra written by Vishnu Sharma. The book contains a compilation of many stories. The author has tried to deliver the morals of life through animal-based stories.

Some of the stories in the book are about A Monkey and crocodile, Elephant and mice, a loyal mongoose, etc. These stories focus on the qualities like friendship, bravery, intelligence, presence of mind, and unity. One of the stories that left me amazed is The story of stork and crab.

The story of stork and crab demonstrates the presence of the mind and brilliance of the crab. The stork could not search for his food when he grew old and so he had made a plan. He stood unhappy and depressed near the pond. When fish and crab questioned the reason for his sorrow.

The stork told them a fake story that the pond will be colonised by people to grow crops. All the fishes, crabs and frogs were convinced by his story. Later when it was the event for the crab to be killed and eaten by the stork, the situation was inverted. Crab used his brilliance and could guess the actual motive of the stork. He escaped by killing the stork.

Magic fascinates both the youngsters and the adults. That is why a book named Harry Potter became so famous around the globe. It is one of my favourite books. I don’t feel tired of reading these books from the series Harry Potter.

Actually, Harry Potter is a series of books written by J.K. Rowling. These books showcase a magic city and its workings. Although the series includes seven books, I have a special favourite. My favourite book from the series is The Goblet of fire.

One of the things which thrill me the most about this book is the introduction to the other wizard schools. The picture of the Tri-wizard tournament is one of the most bright pieces I have come across in the Harry Potter series.

Moreover, this book also includes some of my favourite characters. The moment I read about Victor Krum’s entry, I was struck. The personality of that character described by Rowling is just amazing. Also, it made me become a grander fan of the series.

Paragraph On My Favourite Book- Wings Of Fire

Wings of fire is an autobiography of the missile man of India. It tells the journey of transformation of a common man into a great personality recognised by all. This book can be proven a pure inspiration for those who are ambitious.

Wings of Fire is the story of a little boy who achieved his dreams despite all the odds. This true story tells us the role of family, relatives and friends in helping a person in achieving his goals. Also, this book explains to us how rigid determination can fetch us the aspired results.

The Missile man of India, Dr A.P.J. Abdul Kalam was a Muslim boy, who became the President of a Hindu dominated country through hard work and dedication. We come to know that patriotism does not favour any specific religion. It gives us an inside look into the relationship between Hindu and Muslim communities in India. It tells us, how common Hindu and Muslim respect each other’s religion.

This book is a must for every student because it has the power to inspire a person to excel in life. Wings of Fire is a straightforward example of achieving one’s goals while fulfilling the pledge to the country. This autobiography really has useful knowledge to share, a knowledge which is very difficult to be found elsewhere.