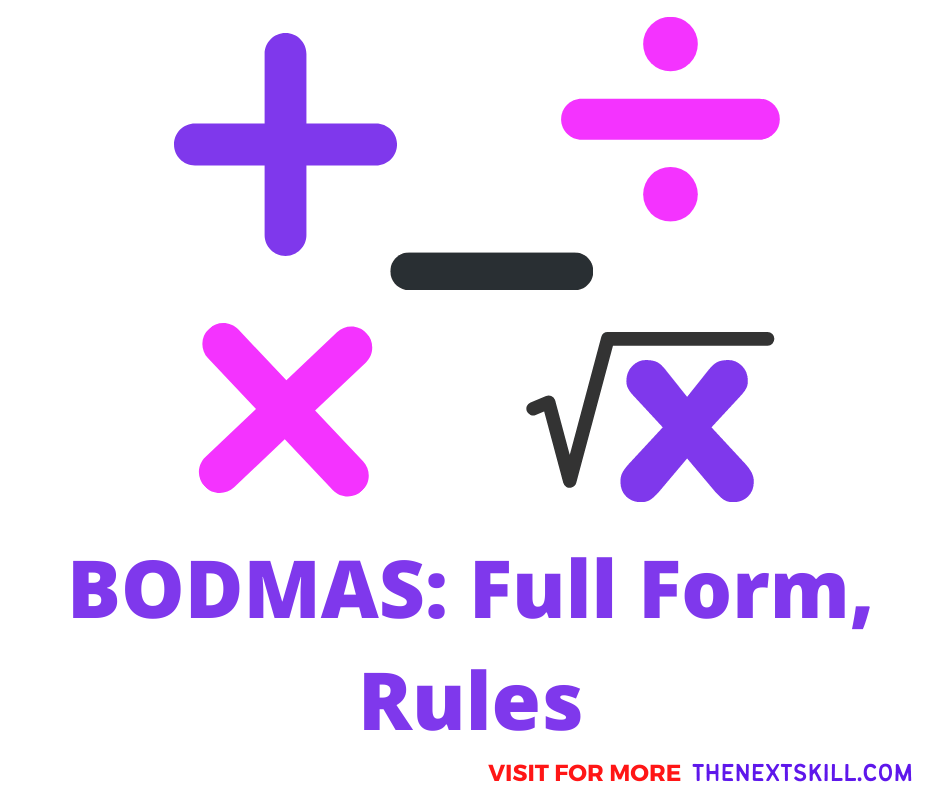 BODMAS Rule is a mathematical concept of solving arithmetic & linear equations. This concept lets you solve the equation when there is a need to solve more than one mathematical operation. For example- addition and subtraction in a single equation.

what is BODMAS and its Full Form?

Let’s see how to apply BODMAS Rule in mathematical problems to deeply understand the concept. We will explore all the letters of BODMAS individually for a better understanding.

B – It is the first letter in the rule and it stands for Brackets. Hence, it is very clear that if a mathematical equation has a bracket, it must be solved very first. But the point is brackets are also many types. Which one to solve first? Let’s see the order of solving the different types of brackets.

The above are given the types of Brackets. The order of solving them is 1, 2, 3. Meaning we will solve Small brackets first, then middle ones and then big ones.

But the point of relief is that you will not have to remember which one to solve first because they have a proper place in the equation. You will find the bigger ones are the outermost and the smaller ones are the innermost.

In short, You only need to understand that start solving brackets from the inner most part towards the outer most.

The next letter in the BODMAS Rule is “O” which has two different meanings. The first indicates “Of” & the second indicates “Orders”. Sometimes the letter “O” is replaced by the Letter “I” which stands for Indices. Then the rule becomes “BIDMAS“.

But both the terms “Orders” and “Indices” refers to “Orders of Indices and root values”. So don’t get confused between the two. Let’s sum up this letter “O”.

Example for “Orders” or “Orders of Indices”

In short, You need to solve “Of” or “Exponents or Root values” whatever is given.

It stands for Division and is the third letter in the rule. Hence you need to divide if the previous two operations are done or missing.

M It stands for Multiplication and it is the fourth letter in the rule. Hence, You can do multiplication if the previous three operations are done or missing.

It stands for Addition and it is the fifth letter in the rule. Hence, You can do an addition if the previous four operations are done or missing.

It stands for Subtraction and it is the sixth letter in the rule. Hence, You can do subtraction if the previous five operations are done or missing.

There is no difference between the application in both of them. The basic idea is the same but some of the letters have been changed. All the respective letters in both acronyms represent the same mathematical operations. Let’s understand.

I hope all your doubts have come to an end. If not let me know in the comment section, and I will better try to make you satisfied. You can read essays here.